‘He wanted me to be a proud Afrikaner’

“I AM proud of being an Afrikaner all over again,” Zelda la Grange told sister paper Beeld yesterday... 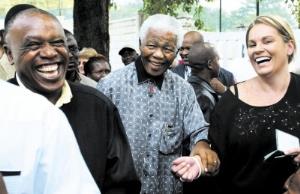 “I AM proud of being an Afrikaner all over again,” Zelda la Grange told sister paper Beeld yesterday.

Giving one of her first interviews since Nelson Mandela’s death, the woman who was his personal assistant for 19 years, said she is on her way to Qunu for his funeral on Sunday.

She said she was very aware of being Afrikaans when she started working for the president as a typist in 1994. “I was very aware that my people had sent him to prison.

“As our relationship grew, I understood that he wanted me to be more proud of who I was, of my heritage and where I came from.

“The fact that I am Afrikaans, the fact that we had a history, should not define how I felt about my language and my culture.

“I think I am walking away from this path and feel proud of being Afrikaans all over again,” she said.

She was supported by rocker Bono when she went to view Madiba’s body at the lying-in-state on Wednesday.

La Grange said she had always assisted the famous people who crossed paths with Mandela.

“I know these people, I’ve walked a long road with them. And they know I looked after them and had their interests at heart. I think they appreciated it and that is why he was there with me.”

She said Bono prayed when he and his wife, Ali Hewson, went with La Grange and Graça Machel’s stepdaughter Olivia.

“The four of us stood there and he prayed for us and for Madiba and it was lovely.”

La Grange said it feels as if her phone is “going to explode”.

“So many people have reached out to me.”

Yesterday morning she spoke to many of Madiba’s former bodyguards and doctors.

“It is hard for me to talk to them again. You can’t help thinking back.”

She said she hasn’t decided what to do next.

Madiba’s illness “forced me to grow up”.

“If you had asked me a year ago, I’d have said I wanted to have a plan for January 2. Now it’s different. I’ll take things as they come. Life will take its course.”

Next year, she will still be working with the Nelson Mandela Foundation on a few fundraising projects and with the Presidency on the preservation of Mandela’s records.

And she will continue Bikers for Mandela, her outreach project that uses well-known bikers to raise money for projects fighting the abuse of women.

“I’ll do Bikers until the day I don’t have legs to ride with!”

And every year on December 5, she will light a Chinese lantern and send it into the sky with a message for Madiba.