VENTERSDORP — Eugene Terre’Blanche’s marriage and character were under the spotlight in the trial of his two alleged murderers yesterday.... 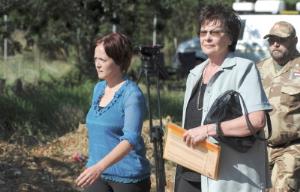 VENTERSDORP — Eugene Terre’Blanche’s marriage and character were under the spotlight in the trial of his two alleged murderers yesterday.

The court was told that at the time of his murder in April 2010, he and his wife were not living together and were in the process of divorcing.

Terre’Blanche’s wife, Martie, who was being cross-examined, denied this.

“I did threaten him with divorce one day when he had been drinking too much,” she said. “I couldn’t take it when he drank, but I wouldn’t really have gone through with it. He said his life would have collapsed.”

Advocate Khomotso Tlouane, representing accused Chris Mahlangu (31), told the court his client will claim that Terre’Blanche sodomised him before the murder and on the day itself.

“He would never, taking into account his integrity and his political views. It is unacceptable and absurd,” said his widow.

Advocate Norman Arendse, representing the teenage accused, asked Mrs Terre’Blanche how she felt about the Jani Allen saga, in which a newspaper columnist claimed to have had an affair with the right-wing leader.

“He had lots of Jani Allens and friends,” she said. “It was wrong that the media implied that he had an affair with her.”

Mrs Terre’Blanche testified that he was “not a monster”, that he was good to his workers and that she was not aware of any violence.

“After he came out of Rooi­grond [prison] a few years ago, he was a lot calmer. He paid for workers’ funerals.”

Terre’Blanche served a prison sentence for the 1996 attempted murder of Paul Motshabi, who was left disabled by a severe assault.

“The magistrate found at the time that your husband got angry quickly and easily turned to violence,” Arendse said. “He had a reputation for violence. His workers feared him.”

The court was told that sometimes his workers were given food bought for the dogs that had passed its sell-by date the day before. Terre’Blanche bought the packs of pap, wors, hamburgers, chicken and hotdogs at a local supermarket.

“The workers ate it by choice,” Mrs Terre’Blanche said. “It wasn’t bad or rotten. They also had free access to [fresh] pap and milk.”