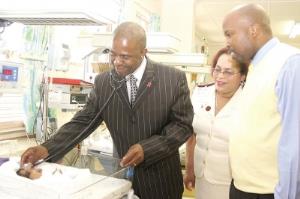 Grey’s Hospital was the first to receive the MEC. Dhlomo had an hour’s meeting with the hospital’s management staff.

He then went on a round of the wards to speak to staff and patients.

“Having listened to the presentation, and being a citizen of KwaZulu-Natal, I am confident that Grey’s can provide a service,” said Dhlomo.

He said the major issues that need to be addressed are those relating to infectious diseases such as HIV, Aids and tuberculosis.

“They also raised issues such as the shortage of staff and the lack of equipment. We find that sometimes equipment is not delivered on time, but that is probably related to supply chain delays,” he said.

“Health is a priority of the country.”

Dhlomo said his department needs to strengthen health service provision and ensure that hospitals have the staff to attend to patients so that long queues are eliminated.

“We want an assessment of hospital personnel so that we allocate funds appropriately,” he said.

Like the visit to Grey’s, the call on Northdale began with a meeting at which the MEC addressed the staff.

Dhlomo said the issues at Northdale Hospital, a district hospital, are different to those at Grey’s, which is a tertiary hospital.

“We allocate the hospital a budget according to the people they see and the amount of work that they do.

“If a patient cannot be treated here, they are able to refer them to other hospitals, including Grey’s.”

Dhlomo also later made a stop at Edendale Hospital.

At lunchtime after the visit, doctors at Grey’s Hospital were picketing over the occupational-specific dispensation (OSD) that was supposed to be implemented in the begining of July 2008.

“The South African Medical Association, the department of Health and the Congress of South African Trade Unions have been meeting to negotiate the OSD implementation,” said a doctor speaking to The Witness. “We are trying to influence this process,” he said. “We are not fighting for an increase, we are fighting for an adjustment to come in line with international standards.”

He said that according to a study conducted by the medical association, doctors in South Africa are being underpaid by between 50% and 70%.

This, he said, is three times below the World Health Organisation’s standards. “If negotiations are not complete by the end of May, there will be mass action,” he said.