MCINTOSH Polela, ex-Hawks spokesperson and author, was convicted and yesterday sentenced in the Pietermaritzburg Magistrate’s Court to a hefty R30 000 fine with a two-and-a-half year suspended sentence... 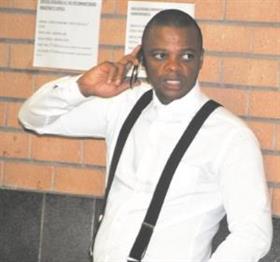 MCINTOSH Polela, ex-Hawks spokesperson and author, was convicted and yesterday sentenced in the Pietermaritzburg Magistrate’s Court to a hefty R30 000 fine with a two-and-a-half year suspended sentence.

Polela may not apply for any hunting permits or hunting gun licences within a two-year period, according to the court judgment yesterday.

A nattily dressed Polela, wearing a smart white shirt and braces, seemed relieved that the whole affair was over and declined to comment after the case was finalised.

Polela was arrested earlier this year when he was found hunting at the Swamp nature reserve outside Hime­ville. He had shot and killed one Reedbuck, which is an endangered animal, and he had also shot and killed a grey duiker.

He was not in possession of a hunting licence and he was in contravention of hunting regulations that state that one may not hunt after dark using artificial lights.

Polela claimed in his defence that he was asked to join the hunting party and that he did not realise that it was illegal as he had hunted there in the past and considered it his ancestral hunting grounds.

Polela grew up in the Underberg district and wrote a book about his childhood memories.

He was ordered to forfeit his hunting rifle, a tripod and silencer for the gun.

Prosecutor Waldo Smit submitted that the decimation of wildlife and the provisions of the Environmental Management Biodiversity Act provided for a fine of up to R1 million or up to 10 years in jail, or both. His advocate, Viv Greene, argued that he should not be stopped from owning a regular firearm, as he was not a danger to society and he lived in a high crime area.

Polela claimed that due to his previous job with the Hawks, he had received death threats and he needed to protect himself. He is currently working as a radio talk show host.

A witness who was part of the group that confronted Polela’s hunting party said he was happy with the sentence handed down.

“We have a constant problem with poachers in the area and someone of Polela’s calibre with an education should know better than to kill animals in a reserve without a hunting permit.”