Support group: Children with rare conditions often don’t get much support, but the mother of a local girl is trying to end that. When completing her psychological evaluation, nine-year-old Bianca Konstantopoulos began to draw her family — mother Debbie Meyer, stepfather Joe and brothers Christopher and Justin — and then took a short cut, finishing the bodies from the shoulders downwards as hearts. 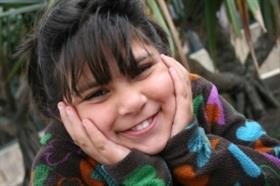 When completing her psychological evaluation, nine-year-old Bianca Konstantopoulos began to draw her family — mother Debbie Meyer, stepfather Joe and brothers Christopher and Justin — and then took a short cut, finishing the bodies from the shoulders downwards as hearts.

The results of the test were disturbing. Bianca’s developmental abilities are those of a six-year-old. Bianca has no memory and can watch the same movie over and over again without recalling it. It is very difficult to teach her to read or write.

This is just the beginning of Bianca’s problems. She has a rare disorder known as cyclic neutropenia. Without enough neutrophils, the white blood cells that fight infections by killing off bacteria in the blood, she faces ongoing, often life-threatening, infections.

In addition, Bianca has severe asthma and suffers attacks that result in “syncope” during which her heart suddenly stops beating. It is thought that repeated “syncopal attacks” may have starved her brain of oxygen, causing parts to die. Doctors still need to complete tests to pinpoint the extent of the damage.

“For most of the time, she has to be in a safe or even sterile environment. Her life is a big cycle of medication. If the weather so much as changes, she gets sick. Hospitals are dangerous. If she is admitted, she needs to be in isolation wards,” says Meyer.

She admits that after the initial sympathy, people often feel that parents of special needs children are simply making excuses. She has had to contend repeatedly with cruel comments and ignorant remarks. As Bianca bounces in to a coffee shop tugging her mother’s arm and begging her to visit the children’s section of a nearby bookshop, Meyer quickly points out that her daughter is not retarded.

“Instinctively you want to stay away from people, but I’ve learnt that if you hold on to every bad thing, you live a very negative life. I’ve also realised that emotional pain is far worse than physical pain.”

Inspired by her daughter, she has decided to create a support group for parents of children with rare disorders.

“The formation of the support group and a trust fund will be to educate ourselves and other parents on how to help their children at home and give them the added care and stimulation required,” explains Meyer.

The trust fund will help parents who have spent all they have seeking medical help for their children, leaving them to rely on over-burdened facilities. Like many of her classmates, Bianca needs both occupational and speech therapy. However, St Christopher’s, the Pietermaritzburg school Bianca attends, is pitifully short of occupational therapists and children have to wait a long time even if they need intensive therapy.

Meyer believes she can draw on her own experiences to help other parents feel less isolated and helpless. She was physically abused by an alcoholic husband and battled anorexia and other medical problems during her pregnancy. Bianca was born prematurely at 34 weeks.

Having fled to Johannesburg with her three children during her divorce, Meyer was managing to pull her life back together when Bianca had her first attack.

By the time she was five, Bianca was having attacks up to three times a week.

“But Bianca doesn’t let a minute go by without doing something. She is an inspiration and gives new meaning to living completely in the moment. [That is why] I’m just taking it day by day. I have had to make peace with the possibility of losing her but I will always fight for her.”

The details of the trust will be published as soon as it has been registered. In the interim, the support group will be up and running.