THE last thing Shona Naicker expected when she went shopping at the Liberty Midlands Mall on Monday was that she would try to comfort a dying stranger. 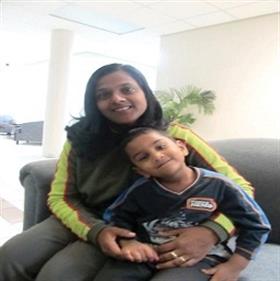 THE last thing Shona Naicker expected when she went shopping at the Liberty Midlands Mall on Monday was that she would try to comfort a dying stranger.

Naicker held the hand of Zimbabwean truck driver George Mbanda (37) as he lay in the mangled wreck of his horse and trailer after his horror crash on the N3.

Mbanda, who was transporting steel from Johannesburg to Durban, is survived by his pregnant wife Betty and two children.

Naicker told The Witness that she and her sister, a nurse, had just come out of the mall’s parking lot when they witnessed the accident.

They immediately ran across to the scene to try to offer assistance.

It was like an earthquake had struck and the truck was reduced to pieces, she said.

“I couldn’t see him. He was trying to move his legs and hands.”

Naicker said they were the first people on the scene and because of the way the truck had overturned, it was impossible to reach him.

However, through a narrow gap she was able to hold his hand,

“We held hands. I told him that help was on its way. I was praying hard for recovery and for God’s angels to do their work.

“He was squeezing my hand with all his strength and didn’t want to let go, I said ‘Jesus loves you’ then he went through a violent jag and he died.”

Naicker said she was still shaken.

“He wasn’t crying. He tried making a sound but was just pressing my hand.”

She described the driver as a “hero” for trying to avoid a bigger tragedy.

She saw Mbanda swerve to avoid a petrol tanker that could have exploded had his truck collided with it, before the horse and trailer lost control and overturned at high speed.

Naicker, who lost her 22-year-old daughter three months ago, said she returned to the car afterwards and sobbed.

It would have been her daughter’s birthday.

Naicker had been in contact with Betty Mbanda, who had asked what her husband’s last words were.

“His wife kept asking me, ‘What did he say?’ I said, ‘nothing, he just kept holding my hand’.”

Mbanda’s family in Vereeniging are distraught.

His aunt, Asanda, told The Witness Mbanda was the family’s sole breadwinner and worked hard.

“We’re now waiting for his body from Pietermaritzburg so that we can take it to Zimbabwe. We don’t know how, where to go or even have means to get to KZN,” she said.

Mbanda’s boss at Spyke Logistics, Balan Rajoo, said the driver had worked for the company for four years.

“The trucks get checked before the drivers can load goods. We can’t speculate about what happened because we were not there,” Rajoo said.

“He was a good person. It’s difficult to replace people. It’s really sad,” he added.