AFTER being forced into the boot of his car and abandoned in the middle of nowhere, Vernon Vogt had to walk for over two hours to find help... 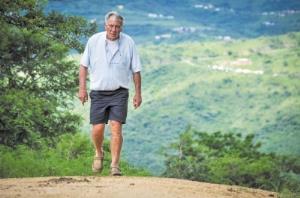 AFTER being forced into the boot of his car and abandoned in the middle of nowhere, Vernon Vogt had to walk for over two hours to find help.

At around 8am on Wednesday morning, Vogt drove to a field near Oribi Airport to walk his dogs. He was approached by two men who told him they wanted his car. They pointed a gun at him, bundled him into the boot and drove off with the car, leaving the dogs behind.

“One had a balaclava on and forced my head down. Their shoes and pants looked like police uniforms. They drove me to an abandoned church somewhere in the Valley of 1 000 Hills near Nagle Dam. Then they tied me up and told me to stay there. They said I had to wait until after dark before I could leave. I didn’t know what would happen after dark so as soon as they left I tried to untie myself,” said Vogt.

Vogt managed to untie himself and began walking: “I didn’t want to walk to the gravel road in case those guys came back and saw me. I didn’t know what they would do if they saw me there. I decided to walk through the bush.”

Vogt fought his way through thick bush, which scratched and bruised him. Eventually he made it back to a gravel road, and flagged down a driver for help.

“I was on my last legs and dehydrated. When I stopped the car I was bleeding. I told the driver to please help, I was just hijacked and I would sit in the back so I wouldn’t mess his car. He told me he had been hijacked too before and to get in. He drove me to the nearest police station.”

At the Msunduzi police station, Vogt was able to call his family, who came to fetch him accompanied by police from the Alexandra Road police station.

When he didn’t come home from his outing to walk his dogs, Vogt’s wife got worried. His son drove to the field at Oribi airport and found one of the dogs and no car. He then went to the police.

Vogt said he wasn’t afraid at first when he realised he was being hijacked; it was only when he was forced into the boot that the fear set in.

“When I was in the boot, I was praying. I never knew I could pray that hard in a boot. I am fine, I don’t care about the car, but I am worried about my dog that is still missing. It’s a black sausage dog named Nugget. She is really skittish; it’s not fair, and she doesn’t understand what happened.”

Yesterday Vogt returned to the field where he was hijacked to try and find his dog.

A case of car hijacking has been opened.