History of Comrades House as colourful as the race

COMRADES Marathon House stands proud and tall at 18 Connaught Road, Scottsville, its Victorian grace a reminder of the city’s roots and history... 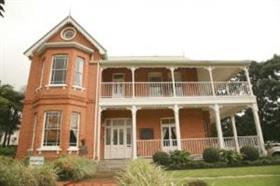 COMRADES Marathon House stands proud and tall at 18 Connaught Road, Scottsville, its Victorian grace a reminder of the city’s roots and history.

The house has its own story to tell, a tale as colourful as the race it represents and the legends whose names adorn its walls and corridors.

It’s hard to imagine that just over 100 years ago, the site was open grassland, with wildlife roaming down to the Msunduzi River.

Travellers from Durban to Pietermaritzburg used the area as a resting spot, with ox-wagons and later stagecoaches pulling in.

In early 1900, the land was incorporated into Pietermaritzburg, covering two acres, and Connaught Road was one of the first to be built in Scottsville.

The land was bought many times through the years, the first owner being Dr W.J. O’Brien, who paid two hundred pounds on June 4, 1903.

In March 1904, the land was halved and William McAllister picked up the piece for 145 pounds.

It took a while for the first house to be built. This was done by a certain Mr Guttridge, but when all building records were lost in the fire at the city hall in 1921, an exact date of the development cannot be determined.

The Comrades Marathon Association (CMA) took ownership of the property on June 4, 1986, from the Church of the Province of South Africa which had owned it since April 1982. It was 2 123 square metres and the ideal spot for the Comrades to grow and mature.

Bob Lambert, who had been associated with Comrades for many years, had been commissioned to find a new home for the CMA due to its popularity and growth.

Lambert was taken to 18 Connaught Road by an estate agent and saw beyond the building’s decrepit appearance.

Former Springbok and Natal rugby captain Wynand Claassen was given the contract, and designs and plans were accepted.

A construction company provided material and labour and a two-year project kicked in, creating the house as it is known today.

An area of specific skill and craftsmanship was the cast-iron gate and fencing. Intricate woodwork and workmanship were required and one of the last old-fashioned lamp posts from the Pietermaritzburg municipality was acquired to round off the feature.

CMA headquarters was originally above the Alexandra Road supermarket. Before that, Collegians Harriers had a Comrades section with meetings held at committee members’ homes. However, the problem of storage meant more secure and permanent facilities were required.

Mick Winn, a future chairperson of the CMA, visited the New York Marathon in the mid-1980s and attended a race expo. The New York City Marathon committee owned a house which dealt with all matters about the race. Winn returned and the seed was planted for a Comrades expo and separate headquarters.

On completion of the renovations, the building received the PBA Building award. It was formally listed as a national monument and was officially opened by then Administrator of Natal, Radcliff Cadman, on March 16, 1988. It received the Natal Regional Award for quality clay masonry in 1988 from the Brick Development Association of SA and the Civic Award for environmental excellence from the City of Pietermaritzburg in 1990.

A CMA museum was established in 1987 and the entire history of the race, from 1921 onwards, is displayed. The museum is affiliated to the Provincial Museum Services and is a member of the Msunduzi Heritage Forum and the SA Museums Association.

As for any ghosts or past winners lurking in the house, no sightings have been recorded, but the odd picture does occasionally fall.