A 25-year-old man, Siyabonga Mdlalose, was sentenced to life imprisonment by a high court judge yesterday for the “gruesome contract killing” of Howick mother Monika Manilall on February 3, 2006. 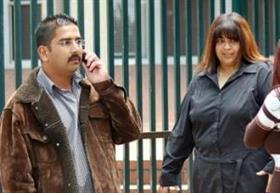 A 25-year-old man, Siyabonga Mdlalose, was sentenced to life imprisonment by a high court judge yesterday for the “gruesome contract killing” of Howick mother Monika Manilall on February 3, 2006.

The court heard that the victim was playing with her one-year-old daughter in her home when the assailants struck.

Mdlalose said in a statement that he shot Manilall once in the chest, causing her to fall to the ground. As they left the scene, she got up and he ran towards her and shot her again in the head.

Judge Ron McLaren imposed the ultimate sentence on Mdlalose in spite of submissions by his lawyer, Zeera Fareed, that he is young, had a clean record and offered to turn state witness against others implicated in the murder.

Mdlalose’s trial was yesterday separated from that of his former co-accused, Mumtaz Osman (34), who is alleged to have master-minded Manilall’s murder because she was involved in an extra-marital affair with her husband, Sanesh Manilall.

In September last year, Osman applied to vary her bail conditions in order to allow her to move in with Sanesh, and The Witness has learned the couple have since married under Muslim rites.

Manilall and Osman were observed constantly in each other’s company throughout her high court appearances this week, and locked in talks with her legal team.

Osman pleaded not guilty before Judge McLaren yesterday to all the charges and her case was postponed to March 3. She is on bail.

In his statement detailing his role, Mdlalose claimed that Osman (with a certain Victor Mbatha) transported the assassins to the victim’s home on the day of the murder, and en route Osman explained how they should enter the house.

Osman told them that the victim’s husband had told her that the maid would not be at the house.

She said they must enter the house via the back entrance as that door would not be locked, and said Sanesh Manilall had left R5 000 in a wardrobe, which they should take as it would “seem to be a robbery”.

Mdlalose said he was recruited for the killing by a former accused in the case, Sithembiso Ngwenya, who has since died. He said that Ngwenya, “Mzolo” and Phumlani Madlala also participated in the murder and robbery. They were promised payment of R10 000.

Manilall’s relatives were happy yesterday that one of her killers was jailed for life, but said they are “waiting” for the other accused to be convicted as well. “We want justice because you can’t bring back the dead,” said one woman who did not wish to be named.