THE fighting spirit and tactical nous of the Australian Hockeyroos won the day in the Spar Cup Four Nations women’s hockey final at Queensmead in Durban on Saturday as they came back from a goal down to stun the world number two team Argentina 3-1 in what was a thrilling match.... 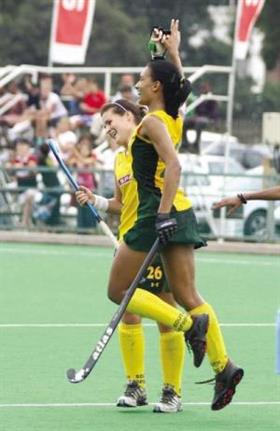 THE fighting spirit and tactical nous of the Australian Hockeyroos won the day in the Spar Cup Four Nations women’s hockey final at Queensmead in Durban on Saturday as they came back from a goal down to stun the world number two team Argentina 3-1 in what was a thrilling match.

And in the third/fourth place playoff, South Africa withstood an astonishing India fightback from a 4-0 half-time deficit to draw 5-5 at full-time and take the penalty stroke shootout 5-3 after the scores were still deadlocked after 15 minutes’ extra-time.

In the final, the world number five Hockeyroos looked a bit out of it in the first half as the Argentineans pulled rank with World Player of the Year Luciana Aymar showing dazzling dribbling skills at times. But for all the South Americans’ technical skill and flair, legendary coach Frank Murray’s Hockeyroos hung in there and had a few opportunities of their own in the first half.

It was the Argentinean Leonas who scored first, Silvina D’Elia slamming in a penalty corner that followed a brilliant 50-metre move between Carla Rebecchi, Alejandra Gulla and Soledad Garcia with five minutes to half-time.

The remarkable second-half Aussie turnaround was due to nothing particularly startling according to Murray — just a case of working harder and smarter.

”On attack we were able to get through their midfield and into their defence,” the Olympic Games gold medal winner said.

Hockeyroos captain Madonna Blyth said in the first half her side gave Aymar too much space, while in the second half the Aussies put more pressure on those, who fed the ball to her and denied the Argentinean playmaker possession.

The Hockeyroos equalised three minutes after the changeover through a penalty corner slip pass to pusher Casey Eastham, scored an action goal via the pacy Emily Hurtz and made it safe eight minutes from the end with a Kate Hollywood deflection from another PC.

“Argentina have more speed and flair than us at the moment, but it is more than just speed and technical skill that wins matches, and our players continue to develop their hockey knowledge,” Murray said.

The SA/India bronze medal match bore all the elements of schizophrenia, as coach Jenny King’s world number 12 SA team simply overwhelmed the 14th-ranked sub-continental side in the first half (4-0) before an amazing fightback saw India win the second half 5-1 in what turned into a 5-5 draw.

The penalty stroke shootout was something of an anti-climax as the injured Indian keeper was unable to take part and an “out” player had to stand in for her.

“Credit to India, but we had run ourselves into the ground against Australia on Friday [that decided the second finalist after Argentina had already gone through] and I knew the second half would be tough,” said King.