Homecoming: Record-breaking trumpeter is back in town

A FORMER Pietermaritzburg cabaret artist and world record breaker is back in the City of Choice after living overseas and in the North Coast for 25 years ... 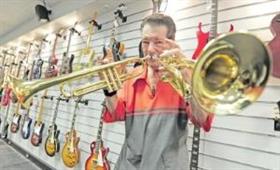 A FORMER Pietermaritzburg cabaret artist and world record breaker is back in the City of Choice after living overseas and in the North Coast for 25 years.

Eddie Payne (77) broke his own world record for blowing two trumpets for 90 minutes and 40 seconds in 1986. He is said to be one of just three men in the world who can play two horns simultaneously.

“It has never made me a millionaire, but it took me to parts of the world,” including south and north America and Australia, he told The Witness.

Payne, who has performed with Kenny Rogers and Dionne Warwick, was a member of pop group Peanut Butter Conspiracy, who had a hit in the sixties with Understanding Is the Best thing in the World.

He said that in Durban in his thirties he once saw a clown play two trumpets with two mouthpieces. “I thought this was almost impossible.”

When he asked the clown how he could emulate him, he told him to keep on trying and never to give up.

Payne did just that, and after a year a sound started coming. He used to practise in an old bus. In the first attempt to break the record in 1983, Payne blew the horn for 69 minutes, but he suffered a hernia as a result.

“I used to sit and put the trumpets on my knees because they were too heavy to hold. This put too much pressure on my neck.”

Now he has a neck ailment — and a heart condition.

“It really messed me up because it was a massive thing to do. But I kept doing it because I thought I was the only one to do it.”

Today Payne plays keyboards, sings and composes. He said he was looking to perform as a one-man band.