Hope in a climate of fear

Book Review: The Uncertainty of Hope by Valerie Tagwira, published by Jacana 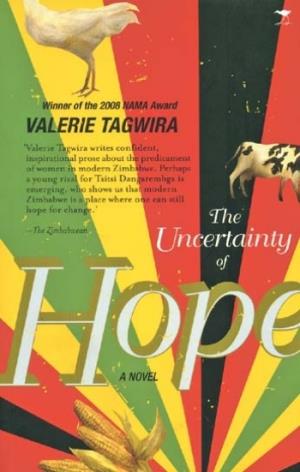 Valerie Tagwira tells a gripping story about two close-knit friends, their families and the daily struggle to make ends meet, while at the same time highlighting the multiple levels of oppression, misogyny and hardship faced by many women in modern-day Zimbabwe.

First published in 2006 in Zimbabwe where it won this year’s National Arts Merit Award, the book has been deservingly republished in South Africa.

Set in Mbare, a high-density suburb outside the capital Harare, the book’s protagonist is Onai, a market vendor who works herself ragged to keep her three children fed, clothed and schooled with no help from her abusive and philandering husband, Gari. She is supported psychologically, and later, financially, by her friend Katy.

Against the backdrop of Onai’s personal pain is a larger story of national deprivation and hardship. Mbare is one of the townships targeted by the government’s May 2005 “Operation Murambatsvina” (Operation Clean-up) in terms of which houses are demolished and informal trading areas razed by bulldozers.

Overnight, hundreds of thousands of people become homeless and jobless. Onai’s HIV-positive tenant who can’t get on to the government’s ARV treatment plan, is forced to camp in an open field with her young baby. The woman eventually dies. Onai’s neighbour, a war veteran who has part of his home torn down, is found dead in a suspected suicide, on a railway track.

This is a well-executed book from a gifted first-time novelist. However, I was frustrated with its lack of political analysis concerning the origins of the problems facing Zimbabweans. Perhaps this can be explained by the prevailing climate of fear and intimidation in that country, but for me it left a rather large gap.

Onai ultimately finds a job and allows herself to believe that her children “would not be oppressed by a system beyond their control”. Unfortunately, I couldn’t find myself being as hopeful. At the end of the book, nothing has changed beyond Onai’s immediate circumstances which themselves are the product of a series of coincidences and personal kindnesses. For millions of other poor men and women in Zimbabwe, the oppressive and unpredictable system continues.

And they don’t stand a chance.