Horns of a dilemma

IT may be too early to tell whether the recent spate of arrests and a visit to Vietnam by a South African government delegation will act to stem the rhino-poaching scourge.... 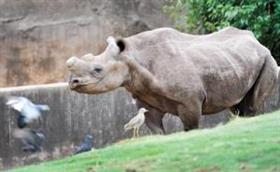 IT may be too early to tell whether the recent spate of arrests and a visit to Vietnam by a South African government delegation will act to stem the rhino-poaching scourge.

This year, 243 animals have been killed in South Africa by poachers. However, one thing is certain — no victories for the conservationists are going to stop a billion Chinese from taking their medicine.

A centuries-old belief, even if it is mired in myth, is unlikely to be discarded simply because the world condemns it, so we might as well come to terms with the continuing impact this will have on the remaining 21 000 wild rhino in Africa.

We might also be a little more careful about criticising other people’s habits. Scratch the surface of Western-style medicine — vivisection would be a good starting point — to say nothing of our own traditional medicine and one might find a good many potions that would make rhino horn look appetising.

More intriguing is the news that China — also a Convention on International Trade in Endangered Species (Cites) signatory — has been importing live rhinos (141) from South Africa. Is this a sign that China is resorting to what has long been mooted — farming rhino to produce regular harvests of horn pruned from live animals?

Horn (keratin) grows and can be harvested and given the prolific breeding capacity of wild-caught rhinos in captivity, a significant bioindustry is not out of the question. Could this be the answer to the poaching problem or is this the tipping point in the ethical treatment of a wild animal that, above all others, has given invaluable service to conservation and our economy, KwaZulu-Natal’s in particular?

It remains in the vanguard of a multimillion rand sport hunting-tourism industry involving about 390 private ranches and 4 000 rhino, to say nothing of the huge revenue it brings to conservation authorities in South Africa and the large chunks of new biodiversity it has helped create. Only one bridge of rational exploitation is left to cross and that is legalising the sale of its humble horn, reputedly worth three times that of gold per kilogram.

Utilitarians proclaim that the stockpile of about 30 tons of rhino horn in Africa should be used to create a legal outlet that would allow the Far East to continue with its medicinal traditions and at the same time pump industrial sums of money into cash-strapped African conservation bodies, as well as add value to private ranching.

Opposing this is a group of conservation sceptics and ethicists — driven animal rightists — who insist that legalising the rhino horn trade will cause an upsurge in poaching. It is an argument often used to conceal the real motive: an absolute abhorrence of any commercial exploitation of any wild animal, regardless of the circumstances.

Enter Cites — a United Nations-style organisation attended by scientific adviser groups — which controls the commercial trade in wild animals through a set of appendices ranging from total prohibition to qualified dispensations. With the exception of South Africa and Swaziland, all rhino in Africa are accorded Appendix One status which means a total ban on trade.

In South Africa, in recognition of the healthy status of the white rhino, both trophy hunting and live sales are permitted under an Appendix Two classification. What is of relevance is that South Africa is home to some 95% of the continent’s white rhino and shares 70% of the rarer black rhino with Namibia.

It should therefore come as no surprise that South Africa, with the largest rhino population and the more relaxed Cites protection, is the centre of the poaching storm. It is a case of more rhinos and more places to poach them in.

Zimbabwe is in a similar position but the difference there is an attrition rate of 10% per annum in a population of only 850, whereas South Africa suffers only a 1,2% per annum loss from poaching from a population increasing at around seven percent. Given the level of controlled commercial utilisation to which white-rhino management has advanced over the years, plus the fact that 35 years of Cites bans have proved largely ineffective, the time has arrived for a fresh approach. Putting our rhino back onto Appendix One is not going to help as criminals will simply focus on the most abundant population.

Unlike Kenya, which allowed its populations to plummet from about 50 000 to a miserable 900, South Africa has surely earned the right to dictate terms. But emotions still play a part. Who can forget the images of Arap Moi, president of Kenya, torching a pile of Kenyan elephant ivory in a symbolic and grand demonstration of anti-commercial sentiment. The gesture may have gained a respite in poaching but it did not stop the worldwide demand for ivory. Instead, it split the wildlife community into two camps: those in favour of a ban on commercialism and those in favour of using ivory as a tradable asset and a means of driving poaching out of business.

One senses that the fundamentalist bloc would just love to see a repeat of the “Arap Moi moment” with President Jacob Zuma setting fire to 20-odd tons of rhino horn.

Rational exploitation of wildlife is indispensable to wildlife conservation. Gone forever is the era of total state sponsorship.

Where then do ethics come into play? Preferably in the norms and standards we apply — how we treat and manage wildlife en route to a sustainable conservation destiny. We must never lose sight of the need for vigilance because abuse, if permitted, will destroy humankind’s sense of responsibility for lesser beings and respect for our own species. Seldom, however, should ethics be applied for the purpose of withholding economic value from the custodians and owners of wildlife because this admits the danger of someone else in a far-off land deciding to impose a value regardless.

First, the legalised sale of micro- chipped horn must be a responsibility vested solely in a state body, a central organisation controlling price and supply, set up by the African range states. Prices must be negotiated to make poaching unviable.

Second, major consumer countries such as China need to be partners to the sales via their own state-controlled agencies to ensure they have a clear incentive to prevent illegal horn entering the system. It will thus be in their own interests to clamp down hard on any illegal activity.

• Third, create from the revenue realised a fund to beef up law enforcement in the contributing states.

• Fourth, use part of the funds to finance deals for communities that feel deprived of land set aside for conservation.

• David Cook is a a retired senior officer of the Natal Parks Board.