ALTHOUGH no one has been able to corroborate the story of the gorilla that abducted two girls from a house in Chase Valley as reported in Wednesday’s Witness, readers have identified the whereabouts of Oakwood, the house where the incident was supposed to have occurred in the late 19th century, as w... 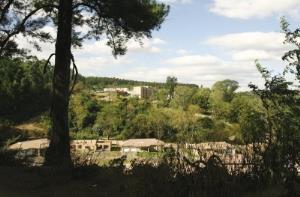 ALTHOUGH no one has been able to corroborate the story of the gorilla that abducted two girls from a house in Chase Valley as reported in Wednesday’s Witness, readers have identified the whereabouts of Oakwood, the house where the incident was supposed to have occurred in the late 19th century, as well as provide information about the Colemans who owned the house.

Dawn Nowell’s parents, Ray and Esme Pierce, bought the house and its 25-acre property from the Colemans in the early 1950s. “We lived there for many years,” she says. “My parents altered the house and turned it into a seven-bedroom, double-storey house. It was definitely haunted — the attic was horrible. My own children would agree: whenever they slept in that room they were very unhappy. But the rest of the house was lovely and I grew up having a happy childhood there.

“I remember the Colemans telling my parents the story of the gorilla and showing them an article about it from an overseas magazine.”

The Pierce children — Dawn, her brother Glen and sister Gail — inherited the house from their mother when she died. “We let it for a while and then sold it to developers 20 years ago. It was pulled down last year.”

Nowell’s nephew, Ray Pierce, contacted The Witness via e-mail from New Zealand where he now lives. He identified Oakwood’s address as being 72 Connor Road, above the old Corobrik brickworks since replaced by the Liberty Midlands Mall.

“In its heyday, when I was a child, there were rabbit hutches, garages, milking sheds, sheds for equipment and tractors, and a large commercial vegetable garden,” Pierce recalls. “There was a lot of wildlife, including the inevitable monkeys, duikers and the occasional bushbuck.”

Pierce remembers his grandparents, Ray and Esme, telling how a child or children had been abducted from the upstairs bedroom. “The house was isolated, and to a young mind, this story was very believable.”

Pierce says that although the house had a beautiful setting with splendid views of the city, it was also “a very creepy place — there were many stories circulated within the family of ‘the brown lady’ seen on the stairwell, and of a person (female, I think) in a white robe seen on the long driveway.”

Pierce says the property was also known as Silver Oaks “due to the proliferation of these trees in the area”.

Daphne Hall knew the Colemans through her husband, the late Eddie Hall. “Mr Coleman was known as ‘Red’ and I remember visiting them and being told about the young son having nightmares which involved some animal.”

After being sold to developers, Oakwood was let to various tenants and at one stage became a student digs known as Thrash Hall. It was demolished last year to make way for the Rivers End Estate development.

•We are not expecting more gorilla stories, but have you had any interesting encounters of the monkey kind? Not the usual complaints about marauding vervets, please — but out-of-the-ordinary experiences with our local primates. Contact Stephen Coan at 033 355 1111 or e-mail feature1@witness.co.za