SOME members of the Inkatha Freedom Party (IFP) in the Estcourt area are threatening to render a local uMtshezi Municipality ungovernable following the disimisssal of uMtshezi mayor Maliyakhe Lymon Shelembe and his expulsion from the party by the party’s disciplinary committee last week.... 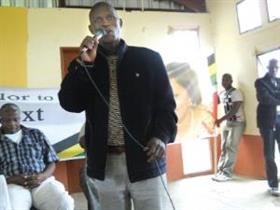 SOME members of the Inkatha Freedom Party (IFP) in the Estcourt area are threatening to render a local uMtshezi Municipality ungovernable following the disimisssal of uMtshezi mayor Maliyakhe Lymon Shelembe and his expulsion from the party by the party’s disciplinary committee last week.

The threats were made yesterday during the first public meeting organised by Shelembe in the eMabhanoyini area of Estcourt since the IFP announced his dismissal and expulsion.

People who attended the meeting came from different areas of Estcourt and uThukela district and vowed to continue supporting both Shelembe, despite his expulsion, and the beleaguered IFP national chairperson, Zanele Magwaza-Msibi.

Said Nomusa Buthelezi, an IFP supporter, at yesterday’s meeting, “We fought very hard to regain this municipality from the ANC after it was taken from the IFP after the floor-crossing

“These people who are now expelling our leaders are mad. We will make sure that the municipality is rendered ungovernable until they retain Shelembe.”

In his address to the meeting, Shelembe vowed that his ousting from the IFP and mayorship does not signal his permanent removal from politics.

“I am going to continue working for the people of Estcourt and uThukela as a whole as long as they still need me. I don’t need a political party to continue working for the community. Everyone of you in this area knows how much I have sacrificed for the IFP. It pains me that now I am being thrown away by people from outside the area who are claiming that you are rejecting me.

“Are you rejecting me?” asked Shelembe to a thunderous response of “No” from the audience.

Before Shelembe could finish his speech the crowd burst into song, chanting “Sokulandela Shelembe” (We will follow you, Shelembe).

Commenting on his removal, Shelembe said that he felt like a “big stone had been removed from my shoulder” and that he is now free to publicly declare his support for Magwaza-Msibi.

The meeting was attended by two former senior IFP leaders and staunch Magwaza-Msibi supporters who had been expelled from the party, Mzonjani Zulu of eThekwini district and former MPL Wiseman Mcoyi.

Another IFP supporter Yvonne Magagula of Okhahlamba, said the IFP in the uThukela district stands by Shelembe.

uMtshezi Municipality is expected to convene a full council sitting before the end of this week to elect the new mayor.

The speaker and IFP uMtshezi constituency chairperson, Bhekithemba Dlamini, confirmed that a letter expected to confirm Shelembe’s expulsion was sent by the IFP to the council last Thursday, “but I was not at the office and do not know its content.”