A MAN was electrocuted and died early yesterday morning while making an illegal electrical connection in Northdale.... 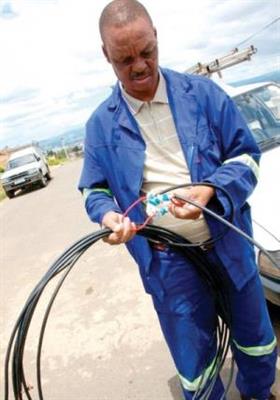 A MAN was electrocuted and died early yesterday morning while making an illegal electrical connection in Northdale.

Sibusiso Ndlovu (23) appears to have slipped on wet grass while carrying a live wire from a central distributor unit at the end of Darjeeling Drive, said Msunduzi electricity inspector Mervyn Patrick.

“He was going to attach it to a long piece of bare wire that came from an informal settlement and crossed the Greytown road,” said Patrick.

Patrick said residents of nearby houses heard a scream outside.

Later, in Park View informal settlement in Raisethorpe, Ndlovu’s brother, Siyabonga Chonco, heard a voice outside the home that he shared with Ndlovu, shouting: “Go check your brother, he’s dead in the bushes at Darjeeling Drive”.

He went there and found Ndlovu’s body, with his chest and face burnt.

“I was hurt to see him lying there,” Chonco said.

“I knew him as a good boy and not troublesome and he loved his friends.”

Chonco (30), said he last saw him alive on Tuesday evening after watching Generations.

“After the soapie he went out and I went to sleep,” Chonco said.

On Tuesday, he had been to two other attempts.

“We remove about a ton of illegal wires a week,” he added.

DA councillor Mergan Chetty, who alerted the officials about the incident, said people needed to be educated about the dangers of electricity theft.

“Electricity theft not only poses a danger to the perpetrator, but to the residents as well.”

Chetty added that people use overgrown areas to connect power between the suburbs and Copesville.

Overgrown grass needed to be cut because that was where “izinyoka” hid the cables.

The police have opened an inquest docket.

Above: Mervyn Patrick from the electricity department showing illegal connections.

Above: The body of Sibusiso Ndlovu, who was electrocuted while trying to make an illegal electricity connection in Darjeeling Drive yesterday morning, is loaded into the mortuary van.