‘I’m sure my father has welcomed him’

MADIBA was like a father to Dr Albertina Luthuli, the daughter of the late struggle icon Chief Albert Luthuli... 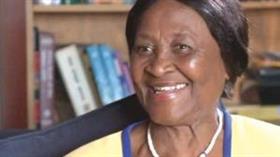 MADIBA was like a father to Dr Albertina Luthuli, the daughter of the late struggle icon Chief Albert Luthuli. “Now that he is gone, I’m profoundly confused and saddened by his passing. He had the ability to make you feel safe, secure, and he was able to comfort people in times of trouble,” Luthuli told Weekend Witness yesterday.

Luthuli believes that the relationship between Madiba and her family has now been renewed. “I’m sure my father on the other side has welcomed him with open arms because their relationship was so solid, because of the common purpose they had during the struggle,” she said.

“After the passing of my mother in early 2000, I knew that the only person I could look up to as a father was Madiba. I’ve visited him with my two grandsons in Qunu. When my daughter got married after his term in office, I invited him. On the day of the wedding, he was held up in a meeting and he sent a message saying although he was delayed, he was still coming, and indeed he made it to the church. His passing is, indeed, a great loss, both to the Mandela family and the country as a whole,” Luthuli said.