In need of an intimate theatre space 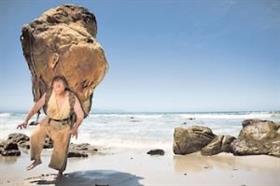 ROB van Vuuren, who started his acting career at Maritzburg College and is probably best known as half of Corne and Twakkie in The Most Amazing Show, brought his one man play, Electric Juju, to Hilton for two performances at the weekend.

Van Vuuren studied at Rhodes with Andrew Buckland, and is directed in this show by Helen Iskander and James Cunningham (Baobabs Don’t Grow Here), and it is easy to see the influence of all three of them.

The action starts with an old man in a storm of King Lear proportions, but soon moves into a world of magic, gods and demons. The Electric Juju is the bad guy, manifested as a voice from heaven. It seems that if he could eat the giant’s heart the old man has dug up, he could become more powerful, and more dangerous. The heart is the only prop — a large and fantastical blob into which Van Vuuren can vanish, which he can carry and which doubles as any scenery he might need.

The directors’ influence is very obvious in the use of the heart to create landscapes in which small puppets can operate — and this inevitably raises a problem in a big theatre. Those near the front can see and understand; those at the back will be out of the loop. Pietermaritzburg desperately needs an intimate theatre space for this kind of work — with the only even moderately suitable venue being the Hexagon Studio.

As the old man tries to save the world from destruction, his creator uses mime — there’s a wonderful “floating head” — and creates a string of characters. Ultimately, Van Vuuren has created an endearing piece of physical theatre, with good triumphing over evil, enough comic touches to keep things light and a strong, skilled performance. But I would like to see it in the kind of venue that would do it justice. It would have been a natural for either the Catalina or the Kwasuka at the Musho Festival in Durban.