CRICKET in the previously disadvantaged schools in the province got a shot in the arm after cellular phone group MTN afforded pupils the opportunity to test their batting and bowling skills through its mini-cricket project. ... 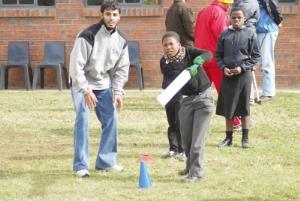 CRICKET in the previously disadvantaged schools in the province got a shot in the arm after cellular phone group MTN afforded pupils the opportunity to test their batting and bowling skills through its mini-cricket project.

The project has been rolled out to underprivileged pupils in Gauteng, Free State and in KwaZulu-Natal. In the province, the project started in the Nottingham Road Combined School in the midlands last Wednesday and it is set to be filtered into other previously disadvantaged schools throughout the province.

MTN has allocated R250 000 for the schools in the province that will benefit from this project. The cellular group has partnered with provincial cricket team Nashua Dolphins to help hone the eager pupils’ cricketing skills and with Active Education for coaching and physical education among other facets.

MTN sponsorship manager Bernard Pieters said that at the beginning of the season, the cellphone group identified disadvantaged communities that do not get the opportunity to watch provincial or national matches and decided to introduce the sport to them.

He said that they hope that through the cricket coaching clinics held by professional cricketers and sport teachers the pupils will develop a liking for the sport and talented pupils might even be filtered into higher structures of the sporting code. Pieters is adamant that the progress of these coaching clinics and the sport-code education will not go unmonitored and that Active Education has been tasked to see that this does not happen.

MTN donated cricket equipment to the school such as bats, helmets and cricket balls. Some of the equipment was sourced from people through donations.

Opening bowler for the Nashua Dolphins cricket team, Quinton Friend, showed the pupils a few tricks and basics of the sport. The clinic ranged from batting, bowling and fielding drills. Friend said that maybe one day one or two of the players can climb the cricket ranks and play for his team and even the Proteas.

School principal Thamsanqa Sokhela said it was a good idea to introduce the sport to the children while they are at an impressionable age and he hopes that they will master the sport as they grow up. School pupils Nontokozo Mbona (8) and Sibonelo Khumalo (9) said they enjoyed themselves and were happy to be introduced to the sport for the first time and they did not rule out wanting to play the sport on a regular basis.