FUNNYMAN Jason Segel (star of the television show, How I Met Your Mother, and the films Forgetting ­Sarah Marshall, Knocked Up, Bad Teacher, Gulliver’s Travels, I Love You Man, Despicable Me) has written, stars in and produced the new Disney movie, The Muppets, which opened in South African cinemas ... 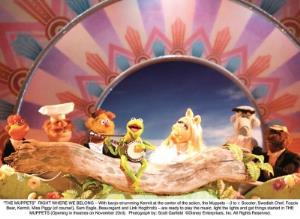 FUNNYMAN Jason Segel (star of the television show, How I Met Your Mother, and the films Forgetting ­Sarah Marshall, Knocked Up, Bad Teacher, Gulliver’s Travels, I Love You Man, Despicable Me) has written, stars in and produced the new Disney movie, The Muppets, which opened in South African cinemas this week. Weekend Witness spoke to the Los Angeles-based actor about the film.

Why did you want to help bring the Muppets back to the big screen?

It started when I was a kid — the Muppets were my first comic influence and I was in love with puppetry. I just thought it was an amazing art form.

We ended Forgetting Sarah Marshall with a lavish puppet musical, and The Jim Henson Company designed the puppets. Something started growing in my belly and Nick [Stoller, who shares the screenwriting credits] and I came up with this idea, and pitched it to Disney. Disney liked the idea, so we wrote the script.

Our whole goal was to make sure that if we were going to do a newMuppet movie that it live up to the expectations of how everyone feels about the Muppets. Whenever I tell anyone, the response is always two-fold: “Oh my gosh, that’s awesome.” And then: “You better not mess it up.”

What is Disney’s The Muppets about?

The movie starts out with me and my brother Walter, whose wildest fantasy is to meet the Muppets, going on holiday to Los Angeles with my girlfriend Mary. While taking a tour of Muppet Studios, which are now decrepit, we find out that they’re going to be torn down to drill for oil. So we have to find Kermit, reunite the ­Muppets — who are now disbanded because of professional rivalries — and put on a show to raise enough money to save the studio.

Tell us more about ­Walter [voiced by Peter Liz]

Walter is naive, sweet, innocent, wide-eyed, he’s very much like Kermit before Kermit became famous. But he just wants to belong. He’s looking for a family, really. The Muppets are the only people he’s ever seen who were like him, so his quest is to become one of the Muppets.

Describe some of the other characters in Disney’s The Muppets.

Mary is a bit of a tomboy — she teaches shop and fixes cars. But her big dream is to marry Gary. Amy Adams­ is super sweet and super innocent and with credits like Enchanted­, she was just perfect for this role. She just really gets the joke and she’s willing to play. We really lucked out.

Kermit’s the everyman. He’s like Atticus Finch. He just wants to be an upright citizen and be kind. It’s all about laughter and love and doing what’s right.

Fozzie is a lot like me. Fozzie has never said a bad thing about anyone and his jokes aren’t that good, but he’s going to keep on trying.

Gonzo’s a wild card. He’s the loose cannon of the group, but like all of the Muppets, he’s incredibly nice.

Miss Piggy is the ultimate diva.

Animal is the part of all of us that is unhinged. Animal is like our Id. He’s like Caliban from The Tempest.

Rowlf’s really cool, sweet and mellow. The entire Electric Mayhem band is like New Orleans: they’ve got a little Cajun to all of them, they’re super nice and a little funky.

How did you feel about singing and dancing with the Muppets?

In the finale of the movie, there are 200 extras, 100 dancers and 50 Muppets. It was very surreal and it happened to take place on my birthday. I walked out from my trailer thinking I was coming to film and everyone sang happy birthday, including the Muppets. I kept thinking, “I’ve tricked everyone. Somehow I’ve made this weird childhood dream come true.”

What makes the Muppets so special?

Modern comedy makes jokes at other people’s expense. The Muppets never make fun of anybody. They’re all about being good and nice and trying to make the world a better place. It’s easy to get a laugh out of making fun of somebody, but the Muppets never relied on that.

To stage a telethon and raise the $10 million needed to save the studio, Walter, Mary and Gary help Kermit reunite the Muppets, who have all gone their separate ways: Fozzie now performs with a Reno casino tribute band called the Moopets, Miss Piggy is a plus-size fashion editor at Vogue Paris, Animal is in a Santa Barbara clinic for anger management, and Gonzo is a high-powered plumbing magnate.

• Kermit received a star on The Hollywood Walk of Fame in 2002. His song The Rainbow Connection, was nominated for an Academy Award.

• It’s been 12 years since the Muppets’ last big-screen feature film, Muppets from Space, in 1999.