THE Springboks’ World Cup-winning captain and hooker John Smit will make his first start to a rugby match in three months when he turns out for the Sharks against Griquas at King’s Park tomorrow. 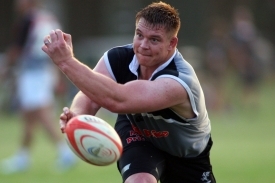 THE Springboks’ World Cup-winning captain and hooker John Smit will make his first start to a rugby match in three months when he turns out for the Sharks against Griquas at King’s Park tomorrow.

Smit last started a game on July 5, when he led the Boks against the All Blacks in a Tri-Nations Test in Wellington. He did not stay long and left the field with a groin injury after All Black Reuben Thorne used him as a rather large caber in an extraordinary (to all except the referee) off-the-ball, after-the-whistle, incident.

Smit returned to South Africa for surgery and has since been recuperating, finally making a five-minute appearance off the bench last week against the Lions last Saturday.

With the season winding down, and just three possible Currie Cup games remaining, Smit desperately needs match practice ahead of the Springbok tour of the UK next month and Sharks coach John Plumtree has obliged by starting with the burly hooker against Griquas. Johann Muller retains the captaincy.

Plumtree, as he said he would, has stayed with the same 22 that did duty against the Lions and he is not planning on changing the squad for the rest of the season. The Sharks coach says he wants his side to build momentum and maintain it for the rest of the competition; the Blue Bulls, in contrast, are resting their high-profile Boks against the Falcons tonight.

Plumtree, in rotational selections aimed at keeping all 22 players involved, has made just three changes to his starting line-up. Smit takes over from fellow Bok Bismarck du Plessis in the front row, Steven Sykes replaces Albert van den Berg in the second row and Keegan Daniel will play at flank in place of Jean Deysel.

Du Plessis, Van den Berg and Deysel are on the bench and, along with the other replacements, are certain to see second-half action. What will also have convinced Plumtree to keep all 22 players involved was the patchy form of Stefan Terblanche and Jacques Botes against the Lions. These two players have consistently impressed this season, but they were rested against the Falcons in Brakpan on September 20 and their rugby appeared to suffer against the Lions last weekend.

The Griquas match kicks off at 3 pm tomorrow and will be screened on SuperSport.