KIMBERLEY — A diamond from De Beers’s exclusive range is the high point of an exhibition at the Tower of London as part of Queen Elizabeth’s diamond jubliee. 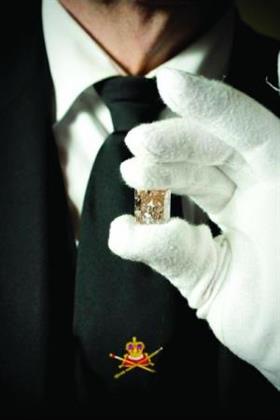 KIMBERLEY — A diamond from De Beers’s exclusive range is the high point of an exhibition at the Tower of London as part of Queen Elizabeth’s diamond jubliee.

The unique 35,60-carat, pink-brown stone is part of the De Beers Forevermark series, and is called the Steinmetz Forevermark Jubilee Pink Diamond.

The number 19522012 — the year of the queen’s accession to the throne and her jubilee year — is engraved on the stone. This engraving is in script so fine, just 1/50 00th of the width of a hair, that it is invisible to the naked eye and special photographs allow visitors to the exhibition to see it.

De Beers said in a statement that less than one percent of the world’s diamonds fulfill the quality requirements to be part of its special series, and each is engraved with a trademark as a sign of its exceptional quality.

Although all the Forevermark diamonds are unique, the Steinmetz stone is unusual because of its pink-brown colour and large size.

It forms the focus of a display showing its journey from the mine to the Tower, which details the six-month cutting process that the 179,96-carat rough diamond underwent.

The exhibition is in the Tower of London’s Martin Tower, where the British Crown Jewels were housed from 1669 until 1841.