“IT’S just like the movie,” gasped a customer at the Liberty Midlands Mall when she caught sight of security guard Nkosiyeza Dlamini swinging by on his new Segway.... 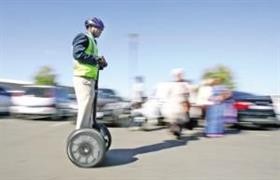 “IT’S just like the movie,” gasped a customer at the Liberty Midlands Mall when she caught sight of security guard Nkosiyeza Dlamini swinging by on his new Segway.

The mall has bought two of these innovative two-wheeler vehicles that were featured in the recent hit comedy Paul Blart: Mall Cop, starring Kevin James of TV’s The King of Queens.

Unlike the movie, the mall’s security personnel won’t be patrolling the shopping halls, but silently cruising the parking lots.

“We had our security previously riding around on quad-bikes,” says centre manager, Cassie Fourie, “but they sat very low and couldn’t see that much. Riding on a Segway you’ve got much greater height and you scan the parking lot.”

Though the two Segways have only been operational for a week they have already paid off, says Pearl Harvey, the mall’s head of security. “Yesterday one was used to apprehend some shoplifting suspects in the car park.”

The battery-powered vehicle is simple to drive says Jonathan Cohen, managing director of Segway SA. “Depending on which direction you want to go you lean forwards, or backwards, or sideways. To stop, you lean in the opposite direction to which you are going.”

“It’s easy to ride as all the time it is monitoring your movements, tapping into your own sense of balance.”

The Segway is quickly mastered. “You can get totally confident in its use in 15 minutes,” says Cohen. “But we put security guards on an advance course that lasts an hour.”

At the Liberty Midlands Mall Dlamini and Harvey have been trained to drive it as well as security guards, Allister Kotze and Lucky Masondo. Dlamini is clearly enthusiastic about his new ride: “I enjoy it — it’s like a sport to me.”

THE Segway personal transporter is a two-wheeled, self-balancing electric vehicle invented by Dean Kamen in the U.S. that first went into production in 2002.

The name Segway is a variant spelling of the word “segue”, and is pronounced the same way. The word refers to a smooth transition, especially in music. Computers and motors in the base of the device keep the Segway upright when powered. Gyroscopic sensors are used to detect tilting of the device.The top speed is 22 km/h, but this can be adjusted down to suit the needs of the user.

Worldwide the Segway has found a market with police forces and security services. “We’ve found that one security guard travels 1 000 kilometres per month on a Segway,” says Jonathan Cohen, managing director of Segway SA. “That’s the equivalent of five security guards,” he added.

“It’s battery-powered and runs at a cost of less than one cent per kilometre. To recharge you just plug it into a wall socket, it is a three-pin 220 volt plug just like a kettle.”