KALISHA Rajcoomar tendered her first public apology for the murder of Sandesh Poorun yesterday, saying if she could give her life for his she would “do it in a heartbeat”.... 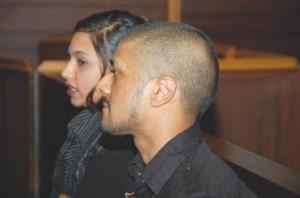 KALISHA Rajcoomar tendered her first public apology for the murder of Sandesh Poorun yesterday, saying if she could give her life for his she would “do it in a heartbeat”.

State advocate Gert Nel suggested to her, however, that the “belated apology” was not sincere, coming 21 months after she and her husband, Amith Sewkarran, strangled Poorun at The Gables bed and breakfast on February 7, 2009.

“I apologised from my heart whether they [Poorun’s family] receive it or not. I can’t force it on them,” she replied.

Reading from notes at the start of her testimony before Judge Piet Koen yesterday, Rajcoomar said she was “very, very sorry” for what she had done and if she could turn back the hands of time she would.

“I pray every night for God to soften your family’s hearts so that one day you can forgive Amith and I for what we have done,” she told Poorun’s family.

She said she had wanted her daughter, Neha, to have the Poorun surname and his “traditions and values” and “never wanted her to be an illegitimate child”.

She also apologised to her own family for the “embarrassment” she caused, as well as to Sewkarran and to Neha.

“I hope that when she grows up she will give me a chance to explain,” said Rajcoomar.

Well-groomed as ever and dressed in a tight-fitting red and white striped t-shirt with white slacks and a white jersey, Rajcoomar retained her composure throughout her testimony yesterday.

Under cross-examination by Auret van Heerden for Sewkarran, she agreed she is a “confident person”.

She testified that she had had no doubt that she would succeed in luring Poorun to the bed and breakfast on the night of the murder as he was “obsessed” with her, but denied Sewkarran was similarly obsessed, saying he had a mind of his own.

Rajcoomar agreed that she and Sewkarran were “equally responsible” for the murder.

She, however, disputed Sewkarran’s version that their plan was to kill Poorun with a fatal dose of alcohol mixed with mandrax, and that when this failed they had to turn to “plan B”, and strangled Poorun instead.

Van Heerden suggested to her that strangulation was “not the easiest” or most common way to commit murder.

Rajcoomar testified that she had loved Poorun dearly and desperatedly wanted him to marry her and make a home for her and Neha. His abusive behaviour and his family’s refusal to accept the baby made her realise the relationship was “finally over”, she said.

She said she loved Sewkarran, who made her happy and was a “perfect father”. She said allegations that she married him for security and convenience were not true.

She denied that she’d had an intimate relationship with both men simultaneously at any time.

It was suggested to her by Nel that she “manipulated people’s emotions”.

Nel read out part of a note she had written to a fellow prisoner she had befriended at Mountain Rise police cells after her arrest in which she stated she had married Sewkarran “for convenience” and yet a day later she wrote a letter to Sewkarran declaring her love for him.

“It wasn’t true that I married Amith for convenience. When I wrote that, I thought Amith had betrayed me and was blaming me [for the murder] … I was confused. I love Amith,” she said.

The court also heard that shortly before the murder, Rajcoomar devised a “dangerous plan” to falsely lead Poorun on and make him think she was intending to divorce Sewkarran. Her motive had been to protect Sewkarran and “take the pressure off him” because Poorun was constantly threatening and harrassing them, she said.

She said the plan worked for a week but then backfired because Poorun had recorded their telephone conversations and he played the recordings back to Sewkarran with the result that Sewkarran wanted to divorce her.

The case is proceeding.