Kalisha: ‘It was a cruel way to kill’

KALISHA Rajcoomar (24) agreed under cross-examination in the high court in Pietermaritzburg yesterday that strangulation is a “cruel” way to commit murder.... 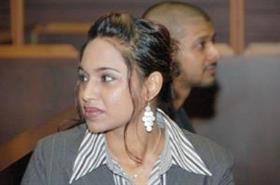 KALISHA Rajcoomar (24) agreed under cross-examination in the high court in Pietermaritzburg yesterday that strangulation is a “cruel” way to commit murder.

Asked by state advocate Gert Nel whether, if she had to kill her former lover, Sandesh Poorun, again, she would choose a different way to do it, she replied: “No, I wouldn’t even think about killing him again.”

Rajcoomar gave a detailed account earlier this week of how her husband, Amith Sewkarran, strangled Poorun on February 7, 2009, with her help. He had screamed and struggled but eventually he was overcome.

Rajcoomar said they had not planned how to kill him, but before fetching Poorun that night she’d asked Sewkarran how he was going to kill him.

“I said, ‘I know that you don’t have a gun to kill him and you don’t have the guts to stab him …’ He [Sewkarran] then said he had trained in the gym and his arms were strong,” she said.

Rajcoomar denied suggestions that she had “embellished and exaggerated” accounts of the alleged abuse she and Sewkarran and their families had suffered at Poorun’s hands.

Nel suggested to her the fact that neither her parents nor aunt saw fit to take any steps to help her — but instead (according to her) turned her out of the house because of Poorun’s continuous harassment — meant they either were not supportive of her or they did not consider the incidents serious.

Nel also confronted Rajcoomar with “disturbing” aspects of her initial confession to the murder, including an allegation that Sewkarran had wanted to have sex with her in the bed in which Poorun was murdered. She admitted the allegation was untrue.

He said it seemed as if she’d wanted to make Sewkarran “look bad”, despite her claim that all she ever wanted was to shield him.

He also  questioned her ability to “switch loyalties” from one man to the other very quickly.

An e-mail she sent Poorun on February 2, 2007, showed she was still in a relationship with Sewkarran, yet just days later — on Valentine’s Day — she wrote to Poorun telling him, “Thank you for loving me so much. This time we are forever.”

Rajcoomar maintained she had resumed her relationship with Poorun after breaking up with Sewkarran at the time only to protect Sewkarran from “continued harassment” by Poorun because she knew that he would not leave them alone.

Rajcoomar also denied that her various attempts at suicide after the murder were not genuine, but merely an attempt to attract attention. “Unfortunately I didn’t die,” she said in reply.

The case will resume on April 18 next year.