Khan serves up a century for KZN

KZN Dolphins opening batsman Imraan Khan compiled a fine century on day one of the SuperSport Series match against log-leading Highveld Lions at Kingsmead yesterday. The Dolphins had a competitive total of 228 for four when bad light brought play to a close for the final time. 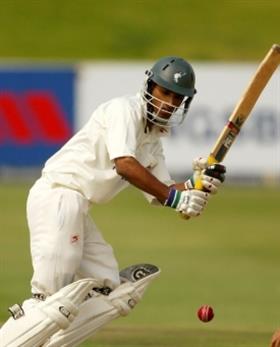 The Dolphins had a competitive total of 228 for four when bad light brought play to a close for the final time.

Khan, a left-hander with a unique, almost taught-myself style and technique — he once had TV commentator and former batting colossus Barry Richards tearing his hair out — and captain Ahmed Amla put on a 127-run partnership for the third wicket.

The 100 partnership came up off 133 balls and in just 92 minutes, as Khan really opened up with some typically flashing shots to reach his third first-class ton (135b, 17×4). The diminutive left-hander had his moments of good fortune, and yet it was something of a damp squib for home supporters when he went softly, scooping a Garnett Kruger delivery straight to cover.

Amla showed maturity in building what could be a decisive innings.

The strong Lions pace quartet did not deliver what Neil McKenzie would have hoped after he won the toss and put the Dolphins in.

Andre Nel was his usual fiery self without reward; Kruger had his moments, but not enough for the Lions’ liking; the honest Cliffie Deacon was caned somewhat; while the shining light was highly promising young quick bowler Craig Alexander (three for 53), who delivered some corkers at pace.

Grant Rowley reportedly was the victim of a stunning yorker that pitched on leg stump. David Miller (19), batting at three again, supposedly due to Hashim Amla’s absence, instead of what was the original plan this season — according to selection convenor Jay Naidoo — of offering him a bit of protection at number six, was reportedly a victim of an lbw call from an Alexander ball that some say pitched outside leg stump. Rivash Gobind (5 in 70 minutes) apparently again struggled up front, but the openers did yield 42 runs.

Saidi Mlongo was left out for the Dolphins and Yusuf Abdullah returned after missing out last week, while McKenzie — free of a rib injury — is back to open the batting. And with the Lions only having four players of colour in their squad, opener Jean Symes, — who got two scores in the late 20s and helped double-ton Alviro Petersen set up a good platform against the Warriors — had to make way for Jonathan Vandiar.