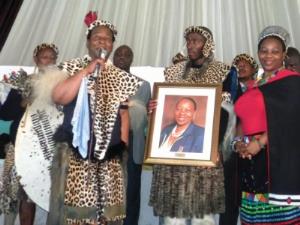 “IF you want what belongs to me, you will die!”

This was the stern warning from King Goodwill Zwelithini kaBhekuzulu on the South Coast at the weekend.

He was speaking at the installation of Inkosi Bathebuya Samkelo Cele of the KwaCele tribe in the Mfangisale area of St Faith’s.

Only a few kilometres away was the homestead of Inkosi Melizwe Dlamini of Nhlangwini.

He is the only one of four KwaZulu-Natal traditional leaders whose application before the Nhlapo Commission for his chieftaincy to be elevated to the level of kingship has yet to be decided.

The monarch said at the weekend that those who “pretended” to be kings “are mad and possessed by demons”.

“Because the people will learn to disrespect you as well,” he said.

In an apparent reference to amakhosi who wanted to be kings he said: “… I am not sitting on this throne by accident.

“I am here because of history and the vows of God and the holy creatures of Heaven … It is I who is expected to rule these sick and mad people … I have to exorcise demons of madness from them,” the king said.

“They pretend they are me while they are sick and dying … I am a multi-bruised bull and I am scared of no one, but I respect the people. “But when you want what is mine from the little that you have got, you will die,” the king added. He likened those who wanted to be kings to Lucifer, the arch-angel who wanted to compete with God, but ended up being thrown out of the heavenly kingdom.

The other chiefs who had applied to be elevated, included Inkosi Langalibalele II Radebe of the AmaHlubi in Estcourt, Inkosi Mabhuda Tembe of the AmaThonga tribe in Ngwavuma and MA Hlongwane of the AmaNgwane in Bulwer.

They asked the commission, established by former President Thabo Mbeki in 2004, to investigate the legitimacy of monarchies across the country.

Tembe has since withdrawn his application while Radebe and Hlongwane’s applications were turned down. Radebe has appealed.

Dlamini’s application is expected to be heard by the new commission, established last year to follow up on applications that were not processed by the Nhlapo Commission. The original list of people who wanted to be elevated to monarch in KZN were: S.D. Mngomezulu and M. Mngomezulu (Mngomezulu tribe), S. Ndwandwe (AbaNguni tribe), M. Miya (AmaZizi tribe), V.A. Madlala (Madlala tribe), D.E. Msomi (Msomi tribe), and M.A. Mavuso (AmaNgwane tribe).

Dlamini’s spokesperson, Inkosi Ambrose Makhoba, refused to comment on what the king said at Mfangisale because his people of Nhlangwini were not invited.

However, he emphasised that Inkosi Dlamini would continue with his application for the elevation of the Nhlangwini chieftainship to a kingship.

Meanwhile, the monarch did not say anything about his recent comments about homosexuals, even though the media were told that he would clarify his statements.

The KZN’s Department of Co-Operative Governance and Traditional Affairs (Cogta) had issued a statement claiming that the he was going to set the record straight.

But Cogta spokesperson Vernon Mchunu said the royal family had told Cogta on Saturday morning that the king was not going to speak on the matter at the function.

“His Majesty went to the KwaCele area for the installation of Inkosi Cele, not to talk about the interpretation of the King’s Isandlwana speech by the media,” said Prince Mbonisi Zulu, the king’s spokesperson.

Zulu declined to comment on the king’s statement about amakhosi who wanted to be kings.