Unseasonable North Easterly winds have over the past week been blowing continuously and have made for some rather unpleasant angling. However, shad have been keeping anglers busy as these fish have now seemed to have entrenched themselves at most spots. 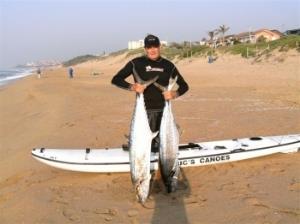 Unseasonable North Easterly winds have over the past week been blowing continuously and have made for some rather unpleasant angling. However, shad have been keeping anglers busy as these fish have now seemed to have entrenched themselves at most spots. Although some are still undersize the majority are of legal size. Apart of the shad most fish seemed to have gone off the bite locally and there is only the odd report of some garrick coming out along the South Coast. At night anglers fishing in the Umkomaas area are still landing some fair size shoal kob. Fishing around Port Edward has improved with small shad on the bite at most of the popular spots. A few local anglers are going out in the evenings and being rewarded with some size kob, one of 31kg’s caught just south of the town. Still no news of the sardines and water temperatures still way to high for them. Perch are on the bite at the M’tamvuna River estuary and the bigger fish are taking Strike Pro lures. Siva Naidoo landed a honeycomb ray of 61.1kg’s on Tuesday at Blue Lagoon after a fight of over 45 minutes. Siva was using his Poseidon 3H rod, .50mm Kingfisher Giant Abrasion line and a red eye sardine as bait. After a few photos this magnificent fish was released alive back into the water. The good news is that fishing in the Transkei has improved dramatically particularly the upper part of the coast. Shad have also moved in and anglers fishing in the Umgazana area have recently been treated to some spectacular angling. Natal snoek have for some reason moved in to these shores and anglers here and other big points on the coast caught some good numbers of these fish. Most of them have been caught by anglers spinning for shad. Just when it seems that it’s as good as it gets sometimes things just get better. Anglers here that have ‘slid’ live shad landed quite a few good size couta, all in the 15 kg to 20 kg range. With little or no news about the imminent sardine run these fish could possibly know something that we intelligent humans will never know, let’s hope these fish are a premonition to a good sardine run.

Ski boats and Fishing skis are again getting stuck into some fine game fish on both North and South Coasts. After a rather quiet spell anglers last week got stuck into some good fish. Reports from the North Coast suggest that good numbers of couta were taken at Highpoint and the Ballito area. Snoek have also been on the bite at most spots and anglers in the Durban area have had some good bags. Much the same could be said for the South Coast where some good size fish have come out. Markham Pollard has caught a few great couta recently, last week before work Markham landed two size couta, 21.5 kg’s and 18.5kg’s, we understand that he caught another three good couta over the weekend. However, as mentioned before boats operating out of Port Edward are now getting some really big fish in the northern part of the Transkei and the lower South Coast. Fishing ski’s operating in this area have also had some very good catches and one ski angler has reportedly landed a monster of 34 kg during the course of last week.

Heer Gaan Ons Alweer is back on TV. This very interesting show is hosted by Petri de Wet and covers many different fishing spots, fresh and salt water in Southern Africa. This fishing show is on kyknet, channel 35, every Thursday at 18:00 with reruns during the week. Check your TV guide for details. Episode 60 they are finishing in Cahorra Bassa, Mozambique. They land tigers up to 9.1kg’s and vundu up 25kg’s on the Daiwa Coastal Inshore Baitcaster bass reels and Daiwa bass rods, great viewing.

The latest ESA magazine is out and on sale at The Kingfisher for R19.95. In this issue they discuss, jigging and plugging in S.A, the hound shark, extreme species of the month, bait demo on glow chokka, what is H.M.G?, drops hot for bass, and the five top fishing spots in Umkomaas.

The Kokstad Fly Fishing Club is hosting the 10th annual Festival on the weekend of 6th – 8th June and will be giving fly fishermen the opportunity to fish some of the finest waters that East Griqualand has to offer. This year entrance will be limited to 100 fly fishermen on a first come first come basis, so get in early. For more info give Bruce a call on 083 306 7317 or Trevor on 083 462 3676.

Lloyd Pereira (as see on ESA) will be hosting a drop shot clinic on Sat 14th June at The Kingfisher, 53 Hunter Street, Durban. 9:00 to 12:00. These clinics are there to help beginners and experienced anglers to see what the sport is all about and how to target certain species of fish. It also shows anglers what equipment to use and also elaborates on safety. This should be a very popular clinic so book early to avoid disappointment. The Kingfisher also hosts a free Fishing Ski Clinic on their premises once a month by Markham Pollard and a Rock and Surf clinic run by Ivan Stopforth. These Clinics are very informative and covers all the basics, including equipment, knots, bait presentation, and tactics. To book for one of these free clinics phone the Kingfisher on 031-3683903.

The following info supplied by Dave Nisbet from KZNCAU “I would like to draw your attention to the correct date for the Postal Round 8, namely the 5, 6 & 7th September 2008. The date for Round 8, as per the Year Book, is incorrect as it was amended after the documentation was sent to the printers due to objections received after the proposed dates were circulated. Please ensure that your members are made aware of the correct date”.

Any info about fishing, fish caught or competitions in your area e-mail Mike at kingfish@iafrica.com or fax 031-368 4137.

For the latest KZN fishing news presented by O.J., tune into East Coast Radio at 5.40am Monday – Friday.