The Kloof Community Police Forum (CPF) are one step closer to realising the building of an additional satellite police station in their area... 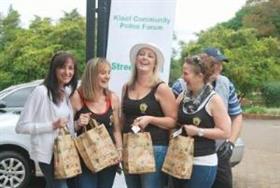 The Kloof Community Police Forum (CPF) are one step closer to realising the building of an additional satellite police station in their area.

This weekend they hosted a golf day at the Kloof Country Club, an effort greatly supported by close to 30 businesses, adding R30 000 to the CPF’s coffers for the project.

The police station, which will be built betweenthe Kloof Library and the Kloof Town Hall, will be funded by projects run by the community.

Project manager for the Kloof CFP Nikki Mohlmann says the current satellite police station is in a shocking state and the community has been forced to build a new station.

Mohlmann said the current station in Kloof is a temporary structure made up of three park homes. There is no running water or toilets inside the charge office and the officers have to leave their posts when they need to use the facilities elsewhere. They have no option but to use the taps and toilet in the police barracks, which is situated on the same premises and where some officers live.

Mohlmann added the sub-station serves over 32 000 residents, with only seven officers on duty.

“We have decided to build our own police station with funds raised through various community projects; the golf day being the first of many.

“We as a community cannot leave it to government alone and need to work together with SAPS in making our country a safer place to live.”

The Kloof CPF chairperson Corne Broodryk said this has been the largest initiative yet to raise funds for any project.

Broodryk said the process to approve the police station is well under way and building should start in the next two years.

“The cost is estimated at R2 million and we are awaiting approval from the SAPS before we can move forward.”

The golf day is one of many events that the Kloof community plan on doing to raise funds for the new station.