KWAZULU-Natal has some of the best mountain bike courses in the world, and Pietermaritzburg boasts one of these, designed by a local man. The World Cup Mountain Bike race is being held in Pietermaritzburg from March 16 to 18, an event which draws competitors and spectators in their droves... 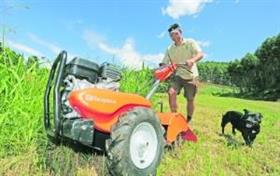 KWAZULU-Natal has some of the best mountain bike courses in the world, and Pietermaritzburg boasts one of these, designed by a local man.

The World Cup Mountain Bike race is being held in Pietermaritzburg from March 16 to 18, an event which draws competitors and spectators in their droves.

Nick Floros, the designer of the Cascades course which will be the course used during the World Cup, said that the enthusiasm that people have for racing in the province fuels this.

“With over 62 races in the province during the year, race organisers need to build the best courses to challenge people,” said Floros, who added that there is significant backing from big corporations and Cycling South Africa.

This is why in addition to the World Cup, the Cascades course will also be hosting the world Championships in 2013.

“There are a number of questions one has to ask when building these courses. The main question is whether the course will be sustainable during the year when there are no big events.

“The beauty of the Cascades course is that there are always people on the course at any given time,” said Floros.

The most important thing to keep in mind, Floros said, is that the track needs to take the surrounding environment into account.

“You have to build around obstacles like boulders and rivers. The courses around the midlands are characterised by their declines, which keeps riders on their toes,” said Floros.

The next aspect one has to take into account is to build a course which can test both top end and entry level riders as well as attracting youngsters to the course.

The final aspect which one needs to cater for is the maintenance of the course, mostly seen to through the help of private sponsors.

Floros told Weekend Witness that it was his love for cycling and past experiences which inspired him to turn his passion into a profession. He added that when he is not building tracks he is attending coaching courses and referees courses to learn to be a race official, which he will accomplish by the end of the year.

Alex Lenferna, from events organising company Real Events Management, says that working with Floros is an event organiser’s dream as he is one of the best in his field.

In addition to building the Cascades course, Floros has consulted on courses in the Western Cape and Mpumalanga.

Although there will be plenty of hype surrounding the World Cup and next year’s World Championships, Floros feels that more needs to be done to reinvigorate people’s interest into the sport.

“ … by the end of the year you should see renewed interest in the sport,” said Floros.