Leaving his old life to the ocean

IN 1909, a young man arriving at Durban on board the Umkuzi XXVIII removed his turban, dhoti (napkin) and earrings and, after changing into modern clothing, dumped them in the sea.... 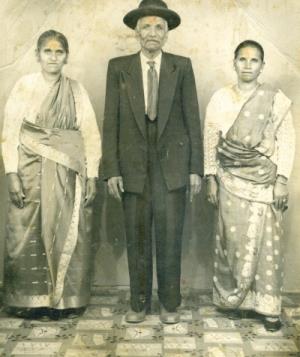 IN 1909, a young man arriving at Durban on board the Umkuzi XXVIII removed his turban, dhoti (napkin) and earrings and, after changing into modern clothing, dumped them in the sea.

It was the start of a new life for Jaganathan Mottai Thayalan, a well-educated, intelligent 17-year-old from Madras (South India) who had decided to leave India for better prospects in South Africa.

This handsome, tall man with grey-brown eyes, light skin and light-brown hair was our dad. He was born in 1892 in the village of Kolur in Polur in Madras.

After arriving in Durban harbour he was, according to records, transported to Honey Grove farm in Harburg near Glenside and was employed by Wilhelm (Willie) Klipp.

Then he was employed by a farmer known as Angus in Ravenworth, where a large number of Indians had settled.

After our dad’s contract expired there he worked for a Mr McKenzie on a farm in Dalton. Subsequently, McKenzie sold the farm to F. D. Klipp (Otto) and our father was employed by him on the farm. He was entrusted to control a large workforce of African and Indian labourers, both male and female. Because he was proficient in the Tamil language and accurate in calculations, he was appointed to the position of sadar on the farm. During the time of being employed by O. H. Klipp he maintained a time book (attendance register) where he kept a record of transactions of all the farm labourers. He had beautiful handwriting and was a strict disciplinarian. He ended up working for three generations of the Klipp family.

Dad was well known and respected in the Dalton, Greytown and New Hanover districts. He was a physically strong person and liked walking barefoot. He only wore shoes when he visited someone and when he went to collect his old-age pension. He had strong teeth which he brushed daily with salt. In his entire career he only visited the doctor on two occasions. He was a Hindu priest, but accepted Jesus as the son of God.

He loved nature and kept sheep, fowls, geese, ducks and rabbits, and on the farm he planted mielies, rice, potatoes, beans, madumbies and chillies.

Dad married Thagamma, who also worked on the farm with him. In later years our mum obtained a hawker’s licence and sold fruit and vegetables. Mum was very hard-working. She was a professional dressmaker and a tailor. Mum also sewed khaki pants and shirts, and sold them to C. Hoosen and Sons, who owned a grocery and clothing store in New Hanover. My dad planted a lot of chillies which he sold to purchase our season tickets for the train to travel to New Hanover School each term.

Dad and Mum ensured that we had school shoes and uniforms, unlike some children who went to school with chapped feet in winter.

Mum was always polite and of a quiet nature. When Dad married her, she did not have children for 11 years and he decided to marry a second partner. Her name was Amakanoo. All of us called her Big Mother and our mother we called Small Mother. After my dad got married to Big Mother, our mother started bearing children and had nine. Big Mother had six children. Altogether we were five brothers and 10 sisters. Thayamma died on October 1, 1983.

Amakanoo (Big Mother) was a mother we all loved. She was a herbalist and cared for all of us.

Dad visited his family in India in 1976. When he left India as a young man he had given his youngest sister a ring as a memento. When he arrived at his village in Madras, his sister still had it, wrapped in a manja cloth.

Dad’s reunion with his sister after 67 years was a time of tears and rejoicing. Sadly, two weeks after he arrived back in South Africa we received a message that his sister had died.

• Bomie Nair is the daughter and J. J. Pillay is the last of the surviving sons of Jaganathan Mottai Thayalan.

• The Witness is publishing a weekly series of articles commemorating the 150th anniversary of the arrival in South Africa of indentured labourers from India.