‘Let Steyn loose if he is fit’

CAPE TOWN — South Africa’s leading all-time wicket-taker in One-Day Internationals has simple advice over the conundrum of whether to field Dale Steyn in the dead-rubber fixture against India at Centurion today: let him loose if he’s ... 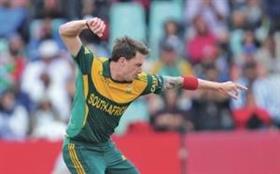 CAPE TOWN — South Africa’s leading all-time wicket-taker in One-Day Internationals has simple advice over the conundrum of whether to field Dale Steyn in the dead-rubber fixture against India at Centurion today: let him loose if he’s 100% fit.

But if there’s the slightest hint of a niggle, it would be better to preserve him for the Test series starting next week at the Wanderers, says Shaun Pollock.

Pollock, fifth on the global list for wickets taken in the format with 393, told Sport24, “I think they’ll need to get inside and really gauge whether he is in a good space [physically] to play at SuperSport Park.

“There is some merit to him keeping his mental edge over the Indians, ahead of the Test series, and there is also still a fair enough turnaround time to day one at the Wanderers [next Wednesday].

“But if he is carrying any injuries, no matter how small, then obviously it also makes sense to sit him out.”

This writer understands that there is a greater likelihood of the Phalaborwa Express not playing, especially as Highveld conditions look like staying damp and slippery for the third ODI, where South Africa will be seeking a clean sweep over the World Cup champions, although a decision is likely to be deferred to shortly before the start of play.

Pollock agreed that Steyn had reached a high point in his ODI career of late — he has taken a stellar 20 wickets in his last five ODIs against either Pakistan or India.

“He’s had the wood over the Pakistani batsmen for some time; that was the catalyst for this run of success. But yes, he is probably at his best ever levels yet in the format and long may it continue.”

Steyn currently sports 123 ODI scalps at an average of 25,49, and has moved back up to fifth on the world rankings, to add to his long-time premier slot on the Test ladder.

As far as can be established, none of those above Steyn ever managed such a golden harvest in the wickets column from five ODIs on the trot, although Donald once netted 21 in six (17 in the first five) in a period in late 1996.

He started that run with his career-best haul of 6/23 against Kenya in Nairobi — the Kenyans were much stronger then than they are these days, sadly — and stretched his explosive form into a Titan Cup series in India, also featuring the home team and Australia.