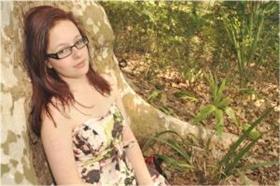 There’s an air of intrigue about this young singer-songwriter, whose musical and vocal ability belie her age. The songs carry a depth of emotion in their delivery, which she admits has caused “lots of tears” among her friends.

“It’s all my life experiences put into songs. Sometimes I’m the only one who gets them,” she quips.

Her parents play an integral part in Ruby’s life and musical career. She cites her mother as the main musical influence, while her step-father has been managing the process of her musical debut.

The album, which was recorded at Arise Studios in Hilton, was launched to massive applause and a standing ovation at The Wykeham Collegiate on Saturday night.

On a stage scattered with ruby roses, the singer-songwriter, seated behind a black grand piano, performed six of the 11 tracks on her new album and then threw in a previously unreleased track When You’re Not Around as an encore­.

The musicians who accompany Ruby include Luke Wyngard from Martizburg College, Bryce Breeds and Daniel du Plessis from St Charles College, Martin Gill from Epworth Primary and Lisa-Clare Garden, a teacher at The Wykeham Collegiate, with Sizo Makhathini, Nandi Khuzwayo and Nicole Gurney from The Wykeham Collegiate.

Ruby contributed 10% of album sales from the night to Asiza Futhi, a Pietermaritzburg-based charity that cares for HIV-positive children — with which The Wykeham Collegiate­ has a longstanding relationship­.