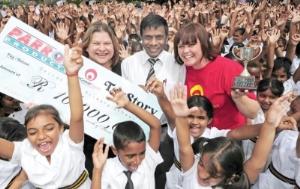 CHILDREN at a city school have shown they have huge hearts.

They collected 1 200 toys and hope to beat that figure by 300 during this year’s drive.

The annual initiative sees toys being collected and delivered to government hospitals, underprivileged crèches, orphanages and child-headed households around KwaZulu-Natal.

At a ceremony yesterday, DJs from ECR and staff from Parrot Stationery rewarded the school with stationery worth R10 000.

Gounden said: “We try and instill a spirit of giving into our pupils from a young age.

“And the response was amazing. The buy-in from parents and teachers really showed that South Africa still has a giving heart.”

ECR’s corporate social investment project manager, Anusha Timul, said it was great to have the schools take part in the drive because children could relate first-hand to receiving a toy.

“Despite their pint size, these little ones have big hearts and it is so moving to see,” Timul said.