A Durban Automotive Cluster (DAC) and South African Business Coalition on HIV/Aids (Sabcoha) pilot project has highlighted the deep commitment of several Pietermaritzburg-based companies to positively addressing the impact of HIV/Aids in the workplace. 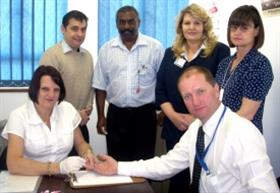 A Durban Automotive Cluster (DAC) and South African Business Coalition on HIV/Aids (Sabcoha) pilot project has highlighted the deep commitment of several Pietermaritzburg-based companies to positively addressing the impact of HIV/Aids in the workplace.

The programme utilises the service provider Aganang and involves eight companies, including five from Pietermaritzburg.

DAC chairman Zama Xaba, who has been one of the main “champions” of this pilot project, told The Witness that the project is critical in securing the survival of the automotive components sector.

The sector is a major employer in Pietermaritzburg and Durban.

“The Pietermaritzburg-based companies have really driven this initiative. What we hope to see is that all automotive component manufacturers in KZN will participate in this process. On a national basis, this programme in KZN is the fastest running programme,” said Douglas Comrie, DAC chief facilitator.

The initiative is driven by management and a team of trained “peer-educators” from the company.

The educators are nominated by workers. The programme entails an awareness training workshop for employees as well as a voluntary, confidential counselling and testing component.

The impact of HIV/Aids on the workplace has undoubtedly been enormous in both KZN and South Africa. It has affected productivity and contributed to higher absenteeism rates.

Overall, the programme focuses on holistic wellness rather than solely on people who are HIV-positive.

Ramsay Engineering, which employs about 480 people, is a local company participating in the project. They noted that about 80% of employees attending the workshops have elected to undergo testing.

According to DAC, the other Pietermaritzburg-based companies involved in the initiative are Kaymac Structural Foam, Preformed Line Products, Pressure Die Casting and Thule Towing Systems.

The second phase of the project will start in mid-January 2009.