THE corridors of Daymed Hospital in Northdale were transformed into the set of a Bollywood movie yesterday — complete with an A-list cast and a world-class crew.... 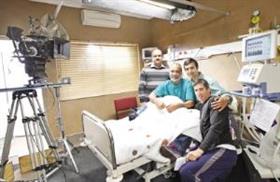 THE corridors of Daymed Hospital in Northdale were transformed into the set of a Bollywood movie yesterday — complete with an A-list cast and a world-class crew.

A new local film Florida Road, which is set in and around Durban, moved production to the City of Choice to shoot one of the movie’s most important and emotional scenes.

“This is a very important scene in the movie — and it is one of the hardest to shoot,” explained executive producer Kelly Ewing, between takes.

“We’ve been here since early this morning,” he said. “It is a seven-page scene. It is very emotional and the actors cannot afford to be distracted,” he added, before the sound engineer signalled that filming was again in progress.

Daymed is one of the many locations in the province where the movie was filmed over the past month, and it will be one of the last locations visited before the film wraps.

“Everywhere we’ve shot this far has been sponsored by the local community,” said Jason Merle, the location manager for Florida Road.

He explained that the movie is being made on a shoestring budget and that everybody involved in production of this feature has done so for the sake of the movie and not their pockets. “Even the cast and production crew are working at rates less than what they usually charge,” he said.

Don’t let this fool you into believing that the film will be anything less than an A-grade flick, especially considering that it was written and produced by some of Hollywood’s finest.

Director Brad Glass said it took around six years to reach this point. “We had an idea and it was shaped over the years,” he said.

Many things changed, including the title and location. “We were going to shoot in Cape Town, but Durban is so much more colourful and visual than most of SA,” he added.

Florida Road’s writer and producer, Fred Fontana, has done many big-budget Hollywood movies. He said that South Africa is so rich in talent that he even sees himself coming back again soon.

The acting team is just as loaded with talent — with a mix of local and Bollywood stars, including Isidingo’s Jack Devnarain, heart-throb Ashmit Patel and Indian veteran Smita Jayakar.

“This is the first time I’ve worked in Durban and this is my first English film,” said Jayakar. “African people are so warm and helpful … This is a beautiful country.”