MTHATHA — An airline company suspected of tax evasion, smuggling and racketeering was used to fly former president Nelson Mandela to Mthatha on Tuesday. 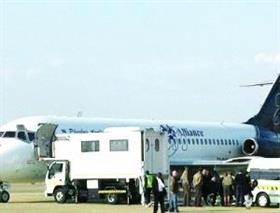 MTHATHA — An airline company suspected of tax evasion, smuggling and racketeering was used to fly former president Nelson Mandela to Mthatha on Tuesday.

The McDonnell Douglas DC-9 aircraft that was used for Mandela is operated by Phoebus Apollo Aviation.

The company is owned by Hendrik “Highway Hennie” Delport, a businessman and pilot who runs it from Rand Airport. The company undertakes regular scheduled flights to destinations in Africa, including Cotonou in Benin, Kinshasa, DRC, and Libreville in Gabon, and list Brazzaville as a second address on their website.

The case was dismissed by a criminal court, but is continuing in a civil court.

SARS spokesperson Adrian Lackay told sister paper Beeld yesterday that the criminal case was dismissed because the judge believed that the prosecutors were biased.

“The case is, however, still continuing in the civil court, where SARS is suing Delport and his company for R264 million.”

The sum excludes fines and interest.

Lackay said they will also return to the criminal court to ask for the original ruling in that court to be reviewed.

“Regarding the civil case, SARS will be guided by the court judgments to obtain the outstanding money, or it might mean seizure of assets or liquidation of companies, or whatever may be necessary,” Lackay said.

Democratic Alliance defence spokesperson MP David Maynier said the use of such a controversial company is yet another massive blunder by the Defence Department.

“Serious questions now arise yet again about the security surrounding the former president and also regarding the procedures followed by the department in the issuing of security clearances. One also has to ask where the air force’s VIP aircraft were in this case. Defence Minister Lindiwe Sisulu will have to give an account.”

The Nelson Mandela Foundation said in response to an inquiry that the foundation is not involved in Mandela’s travel arrangements and referred inquiries to the Defence Department.

Beeld approached the Defence Department for comment and asked whether they were aware of Phoebus Apollo and Delport’s background.

The department was also asked whether the company has proper security clearance for the Mandela transport contract.

At the time of going to press no answers had yet been received.

Phoebus Apollo refused to comment when asked to do so by Beeld.

It was, however, confirmed that Delport is actively involved in the company, before the phone was put down.