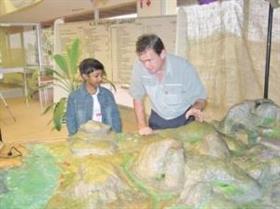 Airport security officials were about the only people who weren’t impressed with University of KwaZulu-Natal academic, Mark Horan, who won the National Science and Technology Forum award for science communication in Johannesburg on May 27.

Officials were not impressed with the large, heavy metal-and-stone award he was carrying. So they urged Horan to check-in his carry-on luggage on his return via Oribi airport.

“But I’ve only got hand luggage,” he protested.

For about 10 years Horan has been based at something with a frightening name — the School of Bioresources, Engineering and Environmental Hydrology, in Pietermaritzburg. And he does something scary-sounding, too — he is a Geographic Information Systems (GIS) programmer, which apparently has something to do with cartography (map making). But don’t be put off by the titles. His message is simple: science is fun.

Judges of the award appreciated this. In explaining why he had won in his category they said: “He has a unique ability to engage with a wide variety of audiences on a range of science, engineering and technology topics and issues and has devised practical ways of illustrating

complex scientific and technological concepts and ideas… His personality and drive to showcase science are infectious.”

In addition to all his research and teaching, Horan goes to local schools, open days, the national SciFest in Grahamstown and has about 50 staff and students currently helping out every day at the Royal Agricultural Show.

His love of science began at a very young age, around age four, while watching his father, a former racer, tinker with motorcycles in Nairobi, Kenya.

scientific concepts to baffled school children. Suddenly, concepts leapt off the pages of dry textbooks and became real. And he’s been doing it ever since.

He continues to find creative and practical ways to illustrate technological concepts, and says the people he works with make all the difference: a team of scientists who understand how and why the 3-D models work are always around to explain things to visitors.

And he says that if one child walks away motivated and inspired, then it’s all been worthwhile.