A MAN lost his life on Saturday when the bakkie he was travelling in crashed into a house located along the Dambuza Road in Edendale.... 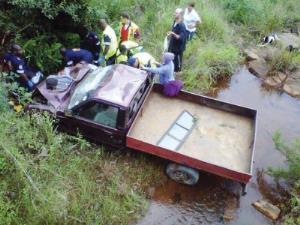 A MAN lost his life on Saturday when the bakkie he was travelling in crashed into a house located along the Dambuza Road in Edendale.

Road Traffic Inspectorate (RTI) spokesperson Zinhle Mngomezulu told The Witness yesterday that, although the house was occupied at the time of the incident, none of the residents were injured.

In total, four passengers and the driver sustained serious injuries. In a separate incident, two men were injured after the bakkie they were travelling in crashed into a stream along a dirt road in the Curry’s Post area in the midlands on Saturday evening.

“Both men were found still inside the vehicle after it had crashed front first into the rocks at the side of the stream,” Vanessa Jackson of ER24 told The Witness yesterday.

She added that the driver and passenger, who were taken to Northdale Hospital for treatment, were in a stable condition.

A total of 16 people sustained injuries in two separate incidents on Saturday in the Lynnfield Park area on the N3 highway.

In the first incident, 11 passengers in a minibus taxi sustained minor injuries after the driver lost control of the vehicle, causing it to roll onto the centre median.

“There had been no other vehicles involved in the accident and it is not clear as to what caused the taxi to roll,” Jackson said.

In the second incident in the Lynn­field Park area, five people were seriously injured in a head-on collision between two cars (a Chrysler and an Opel Astra) on Saturday evening.

Jackson said that rescue workers used the “Jaws of Life” to free both drivers.

Mngomezulu said that a female pedestrian died on Saturday after she was struck by a car travelling on the P291 road in Babanango, Zululand.

A man in his 20s was injured after being struck by a bakkie on the southbound lane of the N2 near the Queen Nandi Drive bridge, north of Durban on Saturday.