Hijacking: Attackers lock man in boot, set car on fire. Hijackers tried to burn a Bergville farm employee alive on Friday night by setting his car alight with him locked in the boot. 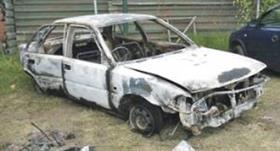 Hijackers tried to burn a Bergville farm employee alive on Friday night by setting his car alight with him locked in the boot.

But Tony Goble (58) managed to fight his way out of the boot of his burning Toyota Corolla, despite having received a blow to the head with the butt of a handgun, which broke four of his teeth.

When The Witness called to interview him on Monday afternoon, Goble was away from home visiting a friend who is ill with cancer. His sister-in-law, Beth Fyvie, said he looked and acted normally.

“But I’m afraid the incident has yet to strike him,” said Fyvie.

Bergville police confirmed that a case of vehicle hijacking was opened.

Later, Goble, who praised God for saving him, told The Witness his amazing story. He said he was attacked at about 10 pm on his arrival home at Hartebees Fountain Farm, where he works, after visiting friends. As he reached the door of his house, he was assaulted by a group of people. He guessed there were six of them.

“They forced me into the boot of my car. They drove off, also taking along a Toyota Hilux bakkie belonging to my employer,” said Goble.

After driving for about 40 km towards Harrismith, his vehicle stopped, presumably having run out of petrol. He said it was cold, and when he smelt fire, he assumed that the hijackers had started the fire to warm themselves.

Goble, who had also been robbed his cellphone, said a few minutes later he saw a minibus stopping next to his vehicle.

He immediately jumped out of the boot into the taxi. That is when he saw that his car was on fire and realised that he had nearly been cremated alive.

The minibus taxi was taking passengers to Harrismith.

After hearing his story, the taxi driver turned back and drove Goble to Little Switzerland Hotel, where he called his relatives and police.

Anyone who knows the whereabouts of the vehicle or suspects is requested to contact their nearest police station, the Bergville police on 036 448 1696 or Crime Stop: 08600 10111.