Johannesburg — A man on his way to a family function in Durban was killed on the N1 highway near Johannesburg in the early hours of yesterday morning after his vehicle hit rocks placed in the road. 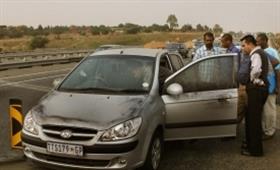 Johannesburg — A man on his way to a family function in Durban was killed on the N1 highway near Johannesburg in the early hours of yesterday morning after his vehicle hit rocks placed in the road.

The attackers apparently shot him with his own gun, which they then stole along with cellphones, wallets and a laptop.

Arren Mahabeer (32) and his fiancée, Velash Naidoo (31), were attacked on a notorious stretch of one of Gauteng’s most dangerous roads at about 2.50 am.

Amanda Joubert of A1 Assist towing services found Naidoo next to Mahabeer’s Hyundai Getz, where she was trying in vain to keep Mahabeer alive.

Joubert said that when she reached the scene, the panic-stricken Naidoo had placed her finger in Mahabeer’s mouth to prevent him from biting his tongue.

Joubert called Netcare 911. Within minutes, paramedics were on the scene, but they were unable to save Mahabeer.

Joubert said she took Naidoo to the tow truck to comfort her.

Naidoo told her that she tried to warn Mahabeer about the stones in the road. One of the stones punctured the left front tyre of Mahabeer’s grey Getz and the couple stopped to check the damage.

According to Naidoo’s uncle, Rajen V. Naidoo, a lawyer in Benoni, Mahabeer was then approached by four men.

“Vee [Mahabeer’s nickname for Velash], do what they say!” were Mahabeer’s last words to her. She then heard a click. When the men ran away, she rushed to Mahabeer and tried to keep him alive.

“They took his pistol and shot him. … He wasn’t even trying to reach for his pistol,” Rajen Naidoo said.

The robbers also took two cellphones, a laptop and wallets.

Police spokeswoman Captain Julia Claassen said police could not confirm that Mahabeer was shot with his own pistol.

Apparently another car and a construction vehicle working on the highway also hit the stones.

Netcare 911 spokesman Mark Stokoe said another motorist also stopped when his tyre was punctured, but he saw the men and sped away.