Mandela is no ‘Uncle Tom’

I AM always astounded by the persistent references in Zimbabwe’s the Herald newspaper, together with its sister publications, to former president Nelson Mandela as nothing more than what African Americans call an “Uncle Tom” or “house nigger”.... 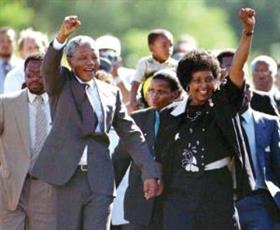 I AM always astounded by the persistent references in Zimbabwe’s the Herald newspaper, together with its sister publications, to former president Nelson Mandela as nothing more than what African Americans call an “Uncle Tom” or “house nigger”.

A recent example of this is contained in an article which boldly proclaims: “But the question is why Westerners embark on this charade of celebrating Mandela as if they believed in his cause? The answer is simple: Madiba, after taking the baton from the other nine ANC presidents before him, did not upset the applecart. He was content to have the crown without the crown jewels, and in so doing became the typical good African who does not pose an unusual and extraordinary threat to United States foreign policy, unlike his counterpart north of the Limpopo.”

A similar sentiment was expressed the following day, January 12, in the same newspaper about the ANC political leadership under the title “The day after the ANC centennial party”. The article says: “South Africa’s infantile disorder as it takes the young adult’s step into the real world of increasingly competitive globalised economy, is that it appears it has chosen to comfort itself with the child’s soothing medicine of economic justice. There is no economic justice in world economy.”

Given the limited print space I have, I can only sketch a few considerations that must be borne in mind in any assessment of Mandela and the South African liberation project.

The United Nations described apartheid as a crime against humanity. It created a society that was not only divided against itself and physically and psychologically torn apart, but also sought to create a multitude of black Africans who were less than human.

In recognition of this reality, Mandela made nation-building and reconciliation one of the cornerstones of his five-year term in office. He recognised that for the new nation to move forward on a solid foundation he needed to forge a common nationhood and a shared sense of belonging. It is under Mandela’s stewardship that the Truth and Reconciliation Commission (TRC) was constituted. He knew that it was not possible to reconcile the past with the present, to forge the shared future without exorcising the gory atrocities of the past.

His nation-building and reconciliation crusade helped to neutralise the Afrikaner right-wingers who had earlier on crashed and bulldozed the World Trade Centre, the venue for negotiations, with military armoured cars.

The other traumatic reality that Mandela inherited in 1994 was the all-pervasive legacy of Bantu Education, which systematically and deliberately excluded a number of key subjects like mathematics, engineering, physical sciences, actuarial sciences, architecture and others from the majority of black public learning institutions.

The consequence of this reality is that the commitment of the black democratic government that came into office in 1994 to introduce these subjects on a massive scale was severely hampered by the extreme scarcity of teachers who were able to offer these subjects. The limited number who could were grossly underqualified. To overhaul the entire Bantu Education system needed drastic measures, yet there couldn’t be any short cut to that mission. Every educationist will attest that to produce a solid pupil, teacher and lecturer requires solid formative primary school years in literacy and numeracy. That is where the entire project to overhaul the system had to begin.

One of the few measures that the democratic government took to ameliorate the situation was to import a great number of foreign teachers and lecturers without driving those that Bantu Education had produced into massive unemployment. That explains why a great number of the teachers and lecturers in these subjects in South Africa even today come from other African countries like Zimbabwe, Nigeria, Ghana, Kenya and beyond. The other measure was to retrain those whom Bantu Education had produced. But if we consider that we need an average of 17 years to produce the best, that in itself could only be an inadequate stopgap measure.

The desired speedy transformation of the economy suffered a similar fate. In the early years of the democratic order, it became extremely difficult to find enough skilled and qualified South African black people to take over the commanding levers of the machinery of the sophisticated South African economy.

There was an extremely limited number of chartered accountants and engineers, etc. because solid mathematics and physical sciences are needed to produce them. It partly explains why even some of the most successful black empowerment companies were for years chaired by South African black owners but employed white people as CEOs or CFOs.

One of the initiatives the government took was to deliberately second black individuals to understudy white executive personnel mainly in state institutions and to compel the corporate sector to comply with empowerment scorecards even at executive levels. That partly explains why Mandela could not “kill the boer” in his five years in office.

The additional measure the government took was to put in place immigration laws that encourage the importation of scarce skills. It explains why government has recruited so many Cuban medical doctors into rural hospitals. There is hardly any higher academic institution of note in South Africa that does not employ at least one Nigerian academic. There is hardly any big corporate finance institution that does not employ at least one Zimbabwean financial literate.

The level of mass mobilisation and politicisation of South Africa that the ANC achieved was unprecedented in the history of liberation movements on the African continent. The reason for that achievement is not simply that the ANC was the oldest liberation movement in the continent. Nor simply that mass mobilisation was the ANC’s primary strategy. It was also that South Africa was the most developed and most industrialised economy in the continent. This meant that it also had the most industrialised and most unionised workforce in Africa.

The consequence of all this is that Mandela in 1994 inherited highly mobilised and highly politicised mass formations that, while they were all anti-apartheid, were different formations with different expectations of what liberation meant for them. Democracy exercised at this level is very expensive because it has other consequences we need to appreciate. The most important of those is that there is a constant imperative to navigate, negotiate and balance many competing sectarian interests, thus slowing down the pace of decision-making and implementation.

For example, since 1994, many economic policies and implementation methods of the ANC have been contested and at times thrown back by the very trade unions and other civil society formations that have always voted and continue to vote for the ANC.

The ANC political leadership is the first one to admit that some mistakes have been made in the first 17 years of political liberation; indeed, to admit that the pace of transformation of the economy and empowering of the black majority needs to be accelerated. It will also certainly admit that “there is no economic justice in world economy”. However, it will argue that we should all strive for economic justice in our own national economies. It is my understanding that the land and the indigenisation policies in Zimbabwe are premised on the quest to achieve economic justice for all the people of Zimbabwe, black and white.

Similarly, the South African policies on land redistribution and broad-based economic empowerment are an attempt to achieve economic justice for all the people of South Africa, black and white. Economic justice includes redressing economic injustices of the past. How we all get there is dictated by our own different historical and material conditions as well as experiences. Mistakes will inevitably be made on the way.

In South Africa we also recognise that there are many sectors of our economy that are technically world class and have produced many world-beating innovations.

The challenge is how to transform these advanced industries without destroying their global competitive urge and catapulting our economy backwards. As a Zimbabwean friend of mine put it to me recently: “You don’t have to burn down the house to make a braai.” The fact is that while we continue to empower the people, at the same time we have to continue with the task of eradicating the negative legacies that Mandela inherited in order to build on a more solid foundation for posterity.

• Vusi Mavimbela is the South African ambassador in Zimbabwe. This article first appeared in ANC Today.