THE ANC’s congress in Mangaung in December will not be another Polokwane, ANC secretary-general Gwede Mantashe has said ... 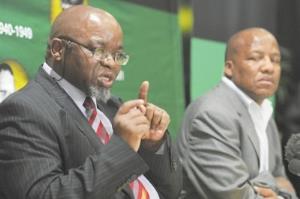 THE ANC’s congress in Mangaung in December will not be another Polokwane, ANC secretary-general Gwede Mantashe has said.

Speaking to journalists at a briefing at Luthuli House yesterday morning after the ANC’s national executive committee (NEC) weekend meeting, Mantashe said: “We are not going to see a repeat of (Polokwane); it is going to be ordered.

“We are not going to see kicking, people on top of tables, howling”, as happened at the party’s 2007 congress in Polokwane, where President Jacob Zuma was elected over former president Thabo Mbeki.

But the run-up to the conference could see “robust” contestation because “it is politics”.

Mantashe said that although nominations were not open yet, it was to be expected that people would declare their support for certain leaders and this would create tensions.

The ANC Youth League has previously been scolded for declaring its support for Sports Minister Fikile Mbalula to replace Mantashe in December.

Mantashe said the ANC in Kwa­Zulu-Natal and Mpumalanga recently had successful congresses and this proved that congresses could be orderly.

The Northern Cape, which was due to have its congress this weekend, got a week’s extension because the Upington venue was booked, while the Free State still had to hold regional conferences, and got a two-week extension.

All provinces were supposed to finish their conferences by the end of this month, and these were the only two outstanding ones.

Mantashe said the NEC declared that the results of December’s fiercely contested Limpopo congress stood, despite complaints, because the irregularities were not so serious that the results should be nullified.

SA Communist Party general secretary Blade Nzimande said the party would not pronounce on ANC succession battles, just as the governing party would not meddle in the SACP’s elections when it had its congress in July.

Speaking at the launch of the party’s congress discussion documents in Cosatu House yesterday afternoon, Nzimande nonetheless declared his support for Zuma.

He said that “with the current [ANC] leadership there is a better understanding and co-operation in the alliance and we are talking to each other. It is a huge difference to what went before.”

Zuma last week refused to say whether he would be available to stand for a second term, telling an audience at a breakfast briefing the ANC would decide.