HE narrowly avoided being suckered into the infamous tanzanite scam, but a local businessman was still robbed at gunpoint by a frustrated con artist ... 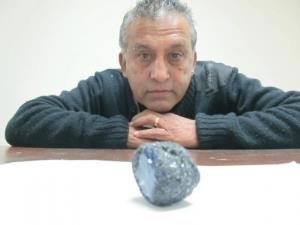 HE narrowly avoided being suckered into the infamous tanzanite scam, but a local businessman was still robbed at gunpoint by a frustrated con artist.

And a newly married couple became unwitting victims when their wedding pictures went missing along with a laptop computer stolen from the businessman.

Construction company boss Ranjith Seunarain (60) warned others not to fall victim to the smooth-talking scamsters after he was left with a worthless rock.

Speaking to The Witness yesterday, Seunarain said he was recently in Durban on business when he was approached by a man who said his friend wanted to use his services.

“He said his friend lives in Umhlanga and he wanted to give me a big contract,” said Seunarain.

“He introduced himself as Chris Khumalo and said his friend’s name was Kenneth Marawa.”

Seunarain was told that Marawa was at a Durban hospital as his father had been admitted there.

He drove Khumalo to the hospital, where they met Marawa in the foyer.

“Marawa was in possession of two sheets of paper that I believed were plans for construction work. But he did not talk about construction and started telling me that he sells bags and other goods made out of leopard skin. He said he was making millions. He showed me a certificate from the South African Revenue Service, which said he was allowed to sell tanzanite and the leopard skins. But I was not interested in this as I wanted them to discuss a contract for construction work,” said Seunarain.

After showing Seunarain the certificate, Khumalo asked if he would drive him to the Pavilion mall.

There Seunarain watched as Khumalo showed a stone, which he said belonged to Marawa, to a man he called Paul. This man identified the stone as tanzanite and said it was worth R245 000.

“Khumalo suggested that we give Marawa R70 000 for the tanzanite rock and we make money out of this. It sounded interesting,” said Seunarain.

Paul tried to give Seunarain money in a black bag to give to Marawa for the stone, but he refused to do so.

At this point the businessman began to get suspicious.

“I realised there was no fixed address given, no vehicle and no identity numbers involved.”

“When Khumalo saw that I was not interested in this business, he said we should return to the hospital. On our way back, he pulled out a gun and ordered me to drive to Game City to withdraw money.

“He threatened me, saying that if I did anything stupid his colleagues would kill me as they were at the centre. I was terrified and I followed his orders. I withdrew R1 900 from an ATM and gave him the money. He took my Blackberry phone, laptop and video camera and other money [R1 400] that was in the car.”

Seunarain said the laptop’s memory contained wedding photos his daughter, a professional photographer, had just taken for a couple.

Khumalo fled from the car, leaving Seunarain with the stone, which he later discovered was not tanzanite.

Seunarain said he was told that three other people had fallen victim to the tanzanite scam recently.

However, police spokesperson Lieutenant-Colonel Vincent Mdunge said they were unaware of any related incidents. He added that no arrests had been made.

Seunarain has learnt his lesson.

“I was a sucker. If there is no ID, vehicle registration or fixed address, don’t touch the deal.”

He appealed to anyone who finds the stolen laptop to hand it to the police.

TANZANITE is a blue-purple gemstone (see right), found mostly in the foothills of Mount Kilimanjaro in Tanzania. In its rough state it is usually a reddish-brown colour. It requires artificial heat treatment to 600°C in a gemological oven to bring out the blue-violet colour. — Source: Wikipedia