THIS afternoon’s final warm-up match against Poland at Orlando Stadium will be the big test for Bafana Bafana and coach Joel Santana ahead of the 2009 Confederations Cup kick-off next weekend. Come through with flying colours and South Africa will go into their Confed opener against Iraq at Ellis P... 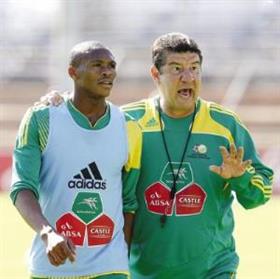 THIS afternoon’s final warm-up match against Poland at Orlando Stadium will be the big test for Bafana Bafana and coach Joel Santana ahead of the 2009 Confederations Cup kick-off next weekend. Come through with flying colours and South Africa will go into their Confed opener against Iraq at Ellis Park next Sunday with confidence. A shaky performance will have the opposite effect.

Poland might make ideal warm-up opposition for Bafana ahead of Iraq because the Eastern Europeans and Middle Easterners are likely to have a few characteristics in common. Like the Iraqis, the Poles are sure to be direct, zealous players and physical.

“We watched their tape only last night,” Bafana captain Aaron Mokoena said after a training session at Milpark yesterday morning. “They’re an aggressive side and pacy up-front — quite strong physically. But they’re not really mobile as we are. And they’re not really technically strong. So it’s all about going out there and playing our own football.”

Poland are sure to highlight whether the likely Confed central defensive partnership of Mokoena and Matthew Booth will have some solidity, or be a potential nightmare. This will be important against the hard-running Iraqis in the opener, and even more so against the likes of Fernando Torres and David Villa in the final Group A game in Bloemfontein against world number one-ranked Spain.

Booth was thrust into the frontline with the axing of Nasief Morris, who paid the price for arriving a day late for camp, then refusing to do interviews. Said Mokoena: “Matthew’s a fantastic player. It’s going to be a challenge for us, but experience counts. Matthew’s been in tough games and I’ve been in tough games, so it’s all about putting it all together and making it work.”

Santana’s altercations with three players who were due to have played in the Confed seem to have earned him some respect from a suspicious media and public, who have grown tired of the no-shows and indiscipline of some Bafana players. He set the tone with the axing of Benni McCarthy for missing two friendlies, then Mabhudi Khenyeza who went awol to perform a traditional ceremony.

Midfield star Teko Modise sat out yesterday’s training with a tight thigh muscle, which the national team medical staff said was a precaution and he is set to play today. Left-back Tshepo Masilela was also nursing an injury and his place in the shadow starting XI was taken by Innocent Mdledle.

Santana looks set to start Bernard Parker and Terror Fanteni at striker, which will represent a rare injection of pace up-front for Bafana. Steven Pienaar and Modise are likely to provide the width on either side of Kagisho Dikgacoi and Macbeth Sibaya in midfield.