Meyer aiming for a winning start

THE Springboks have a new coach and captain, and they are entering a fresh era, but tactically they will dip back into the past when facing England in the first of three Tests at King’s Park this evening... 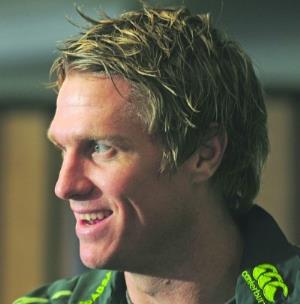 THE Springboks have a new coach and captain, and they are entering a fresh era, but tactically they will dip back into the past when facing England in the first of three Tests at King’s Park this evening.

Coach Heyneke Meyer is certain to ignore the frills and look to play largely Bulls rugby in his desperation to make a winning start to his tenure as Springbok coach. Facing an England team fresh from a full season of international rugby, Meyer has had just three days to prepare a cohesive unit after three months’ of bang-crash Super Rugby.

Understandably, in selection, he has fallen back on players and combinations he knows and he will have them playing a style of rugby familiar to him and the key players in his team. Changes in personnel, style and strategy will come later once he and the players have had time to settle and gel.

The Boks will look to play a structured game based on territory, with the boot of Morné Steyn securing field position and punishing England mistakes. Part of Meyer’s plan, through no fault of his own, has already gone awry. The injury to lighthouse Andries Bekker has denied him one of the leading lineout forwards in world rugby, while scrumhalf Fourie du Preez’s reluctance to return has cost him one of the best tactical kickers in world rugby.

And this is Meyer’s problem. In playing a tactical game around the boot of Morné Steyn, the Bok coach needs a dominant pack, one able to secure their set piece possession and dominate the collisions on the gainline, to allow his flyhalf to dictate the game.

If his rookie locks, the 20-year-old Eben Etzebeth and Juandré Kruger, struggle to play with authority, and if the scrum is placed under pressure by the English pack, does Meyer have a Plan B?

The young, new-look England team, revamped since the disastrous Rugby World Cup, are now playing with enthusiasm, energy and optimism. They believe they have the young talent necessary to topple the vulnerable and under-prepared Springboks if they can match them at forward.

“If we are serious about becoming one of the best sides in the world, we need to benchmark ourselves against the best,” coach Stuart Lancaster said yesterday.

“We go into the game very respectful of the challenge, but equally, we should have quiet confidence about our ability as well.

“But you can feel the weight of expectation and pressure,” he added.

England, with the boot of Morné Steyn a constant threat, will not want to play too much rugby in their own half, but they are likely to play a more ambitious game than the Boks in attempting to exploit their pace on the outside while looking to their muscular centre, Manu Tuilagi, to run at Jean de Villiers at outside centre.

The Boks have said publicly they plan to use the powerful Frans Steyn to attack England’s inside channel (flyhalf Owen Farrell and South African centre Brad Barritt), and the Sharks flanks, debutant Marcell Coetzee and Willem Alberts, will also hope to provide momentum down the middle.

“If the Boks want to give away their tactics, that’s their prerogative,” he said yesterday. “Gainline dominance is obviously important to the way they want to play. It will be a collective effort in stopping them.”

Barritt said the Boks could be exposed if they fail to generate frontfoot possession (as the Sharks found in losing to the Lions in their last Super rugby game at Ellis Park).

“We’ll try to impose ourselves on them by holding on to possession,” the former Sharks player said.

Time has been short, but both Meyer and new captain Jean de Villiers are delighted with the mood in the Bok camp.

“I really think we had a fantastic week preparation-wise,” De Villiers said at a media briefing yesterday. “We only had three days, but I think the camps that Heyneke had during the year really worked and we’re reaping the rewards now.”

De Villiers said the challenge would be “massive”.

“I think once we pass this first hurdle, it can just get better and better.”

It is unlikely to be a pretty Test, and particularly as there is a suggestion of rain, but Meyer is looking to the Springboks’ physicality, their intensity and the kicking of Morné Steyn to trump a lively, better-organised and cohesive England outfit in a tight contest.