Meyer likely to leave out Lambie when naming squad

THE Stormers have been grumpy since the weekend when new SA coach Heyneke Meyer named a Springbok squad with a distinctive bluish tinge, but by later today the Sharks supporters will also have their knickers in a knot... 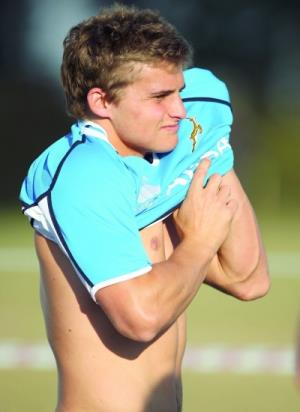 THE Stormers have been grumpy since the weekend when new SA coach Heyneke Meyer named a Springbok squad with a distinctive bluish tinge, but by later today the Sharks supporters will also have their knickers in a knot.

Meyer included 13 Bulls, 10 Sharks and only three Stormers in his 32-man squad, but when he names his starting line-up today there will be a far more even spread between the three franchises, with the Sharks having half-a-dozen players and the Bulls five with three from the Stormers.

But the indications are that Meyer will surprise everyone outside Pretoria by including the Bulls’ Zane Kirchner ahead of the Sharks’ Pat Lambie at fullback.

Lambie hardly put a foot wrong when playing at fullback for the Springboks at last year’s Rugby World Cup. He has spent most of this year’s Super Rugby competition at flyhalf for the Sharks, but has had no problem slipping back into the fullback role in recent games for the Sharks.

Still, the Sharks will be well-represented in the starting line-up and Lambie’s time will come again.

Sharks flank Marcell Coetzee, who only turned 21 last month and has only a year of senior rugby behind him, seems certain to make his Springbok debut on the open side on Saturday.

It is expected that he will be joined in the backrow by Sharks team-mate Willem Alberts and Bulls number eight Pierre Spies.

Meyer has been hit by injuries, but he will opt for familiar combinations where possible with a Bulls halfback pairing in Morné Steyn and Francois Hougaard and the all-Sharks front-row of the Du Plessis brothers and Beast Mtawarira.

But the Boks, after losing Victor Matfield, Bakkies Botha, Danie Rossouw and now Andries Bekker, are suddenly vulnerable in the second-row and will field a pair of rookie locks in the tall, 20-year-old Eben Etzebeth and Juandré Kruger. The streetwise English are certain to target them on Saturday.

A feature of this team will be the versatility among the backs and nearly all — apart from flyhalf Morné Steyn — have played top rugby in at least two different positions.

What is also remarkable is that all 32 squad members (and the six other younger players who are training with the Boks) came through a tough weekend of Super Rugby without any serious damage.