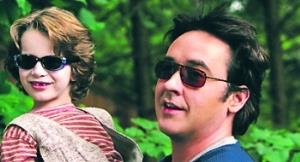 JOHN Cusack, always watchable and sometimes bringing a unusual take to a character (remember his cautious and sensible FBI man in the over-the-top Con Air?) is David Gordon in Martian Child. A widowed science fiction writer, he feels he understands what it is like not to fit in. He was, after all, a weird kid. So when he decides to adopt a child (as, apparently, his late wife wanted to), he seems a good match for Dennis, who lives under a big carton at a children’s home. Dennis, it seems, is afraid of the sun, seeing as he comes from Mars. It’s the logic of a child, not a scientist, but David meets him halfway, providing sunblock and sunglasses to coax him out.

He takes him home and initially, allows Dennis to continue his fantasy. But it’s not so benign. The boy’s Martian story is his way of coping with abandonment, and his behaviour is often a challenge to David, who is still coming to terms with his wife’s death and struggling to write a bestseller sequel he doesn’t want to.

He thinks he’s connecting with Dennis when he enters the boy’s fantasy, but is he really helping? Slowly, David comes to see that Dennis has to come down to Earth in order to go forward.

Martian Child is pretty sentimental stuff, but for me it didn’t seem horribly manipulative. It’s apparently based on a true story, and it certainly fits into the “troubled kid”genre.

The supporting players aren’t really stretching themselves — Oliver Platt is the slightly coarse but good-hearted agent, Amanda Peet the goofy friend who might be something more — but Bobby Coleman as Dennis is really rather affecting.

The film doesn’t lay the whole scenario out. David’s wife is dead, but we know nothing of the circumstances, and the ending is understated, which is, you’ll agree, rare.

Martian Child won’t appeal to everyone, but it appealed to me.