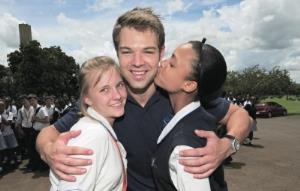 Their screams rang across the hall.

Bergh visited the school as part of his national motivational tour. He is expected to visit 50 schools in 40 days across the country.

“He’s so cute,” one girl whispered. “Can I please get a hug?” “Are you single?” another brave girl asked.

There was a roar when he jokingly told them he would leave his number behind. He worked up a sweat posing for pictures and giving hugs.

However, Mr South Africa had more serious things to share.

He started with a few jokes then told the youngsters that they are never too young to have dreams. He also advised them to work hard, strive to live a balanced lifestyle and get involved in sports.

“I wish I had started having dreams for the future earlier and to live a positive life. At school I was one of those boys that sat at the back, but I regret those moments now,” he added.

His life might look glamorous right now, but achieving one of his biggest dreams, holding the Mr South Africa title, didn’t come easy.

“When I told my friends I wanted to become Mr South Africa they mocked me.

“Imagine this ‘Boerman’ going to my dad to tell him about it. He just said, ‘Son, you can’t be a Mr South Africa. You’re a rugby player and you don’t have the looks’.”

Despite the discouragement he pursued his goal.

“This is a positive strategy to motivate our kids. They need inspiration and I believe this is a fruitful exercise,” he added.