COW heads littered the N3 after a truck carrying meat had a collision near the Liberty Midlands Mall in Pietermaritzbug ... 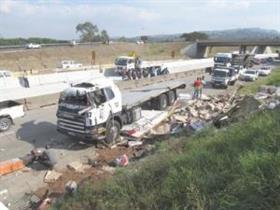 COW heads littered the N3 after a truck carrying meat had a collision near the Liberty Midlands Mall in Pietermaritzbug.

Word quickly spread and bystanders rushed to help themselves to heads and boxes of frozen meat.

The driver walked away from the accident with just a scratch.

It was the third truck accident on this narrow section of the highway — which is under construction — in just over a week.

“The truck was clipped by another that was overtaking it and went on to the embankment,” said Michael Baxter, a construction worker who saw the accident.

The truck flipped on to its side.

Baxter added: “After busting out the windscreen, he [the driver] climbed out, and looked fine, although he did have a few cuts on his forehead.”

Baxter said the driver of the truck that caused the crash stopped, and left once after paramedics and police arrived.

The accident happened between 9.45 am and 10 am yesterday, and took about two hours to clear the highway, causing traffic to come to a standstill.

Hans Hartman, the operations manager for KZN Private Ambulance, told The Witness the driver was taken to St Anne’s Hospital.

“He suffered lacerations to the head and soft tissue damage on both legs,” said Hartman.

Another man who worked for the same company said he suspected he had been travelling to Durban from Cape Town.

“I’m not really sure where he was driving from, but I suspect that that is where he came from because we are a Cape Town-based company,” said the man who did not want to be named.